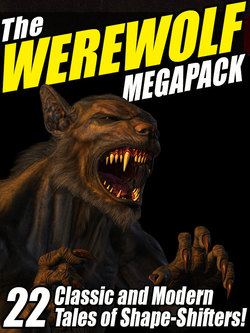 "The Werewolf Megapack" collects 22 classic and modern tales of shape-shifters (and not just wolves!) – including works by Jay Lake, Jack Williamson, Nina Kiriki Hoffman, John Gregory Betancourt, Rudyard Kipling, Saki, and many more. Included are: <P> LEOPARD, by Jay Lake<BR> GABRIEL-ERNEST, by Saki<BR> SYMPATHY FOR WOLVES, by John Gregory Betancourt<BR> THE DRONE, by Abraham Merritt<BR> THE WERE-WOLF, by Clemence Housman<BR> AND BOB’S YOUR UNCLE, by Chelsea Quinn Yarbro<BR> THE MARK OF THE BEAST, by Rudyard Kipling<BR> DUMPSTER DIVING, by Nina Kiriki Hoffman<BR> THE WEREWOLF, by Eugene Field<BR> THE WOLF, by Guy de Maupassant<BR> WOLVES OF DARKNESS, by Jack Williamson<BR> THE MAN WHO WAS CHANGED INTO A CROW, by P’u Sung-ling<BR> HUGUES, THE WER-WOLF, by Sutherland Menzies<BR> THE WHITE WOLF OF THE HARTZ MOUNTAINS, by Frederick Marryat<BR> THE SHE-WOLF, by Saki<BR> MORRAHA, by Joseph Jacobs<BR> THE OTHER SIDE: A BRETON LEGEND, by Eric Stenbock<BR> THE WHITE WOLF OF KOSTOPCHIN, by Sir Gilbert Campbell<BR> THE WOLF LEADER, by Alexandre Dumas<BR> THE HUNTER’S MOON, by Michael McCarty & Terrie Leigh Relf<BR> WEREWOLF OF THE SAHARA, by G. G. Pendarves<BR> EVIL FORCES, by Gary Lovisi <P> And don't forget to search for «Megapack» or «Wildside Megapack» in your favorite ebook store for more entries in Wildside Press's Megapack series, ranging from science fiction and fantasy to westerns, mysteries, ghost stories – and much, much more!

A NOTE FROM THE PUBLISHER

Over the last year, our “Megapack” series of ebook anthologies has proved to be one of our most popular endeavors. (Maybe it helps that we sometimes offer them as premiums to our mailing list!) One question we keep getting asked is, “Who’s the editor?”

To the younger brother all life was a spiritual mystery, veiled from his clear knowledge by the density of flesh. Since he knew his own body to be linked to the complex and antagonistic forces that constitute one soul, it seemed to him not impossibly strange that one spiritual force should possess divers forms for widely various manifestation. Nor, to him, was it great effort to believe that as pure water washes away all natural foulness, so water, holy by consecration, must needs cleanse God’s world from that supernatural evil Thing. Therefore, faster than ever man’s foot had covered those leagues, he sped under the dark, still night, over the waste, trackless snow-ridges to the far-away church, where salvation lay in the holy-water stoup at the door. His faith was as firm as any that wrought miracles in days past, simple as a child’s wish, strong as a man’s will.

He was hardly missed during these hours, every second of which was by him fulfilled to its utmost extent by extremest effort that sinews and nerves could attain. Within the homestead the while, the easy moments went bright with words and looks of unwonted animation, for the kindly, hospitable instincts of the inmates were roused into cordial expression of welcome and interest by the grace and beauty of the returned stranger.