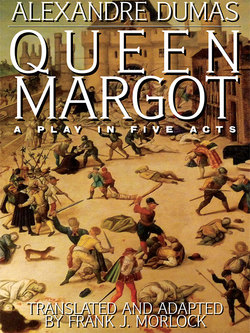 Written in 1847, while Dumas was at the height of his powers, this play recounts the events leading up to the Saint Bartholomew's Day massacre of the French Huguenots–and the subsequent death of King Charles IX. The playwright focuses on the people inadvertently caught up in the slaughter–which, once started, cannot be repressed. By following the fate of two nobles, the Catholic Count Coconnas and the Huguenot Count de la Mole, and linking their stories to Queen Marguerite (called Margot), wife in name only to the Huguenot King of Navarre (the future King Henry IV of France), Dumas reveals the terror and duplicity that the massacre incurred even at the highest levels of society–including the royal family. Despite its length, the story moves quickly and with great force. One of Dumas's best historical narratives!

An omelette with bacon, so you won’t have to wait, Your Lordship.