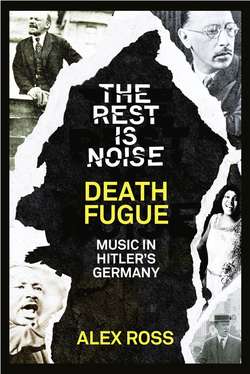 This is a chapter from Alex Ross's groundbreaking history of 20th century classical music, The Rest is Noise.

It is released as a special stand-alone ebook to celebrate a year-long festival at the Southbank Centre, inspired by the book. The festival consists of a series of themed concerts. Read this chapter if you're attending concerts in the episode The Art of Fear: The music of oppression and war.

The Weimar era brought many disappointments. While Krenek’s Jonny and Weill’s Threepenny Opera played to packed houses, Strauss’s artful if sometimes overprecious operatic comedies—Intermezzo, Die ägyptische Helena, Arabella—met with mixed success. By the end of the twenties he had gone a long time without a hit, and insecurities were gnawing at him. Coincidentally or not, his politics slid to the right. When, in 1925, a young journalist named Samuel Wilder—soon to become Billy Wilder, director of Sunset Boulevard and Some Like It Hot—knocked on Strauss’s door to ask his opinion of Mussolini, the composer expressed admiration for the dictator. Strauss met Mussolini more than once, and the two men evidently shared their disgust for artistic modernism. Later in the decade, Count Harry Kessler attended a luncheon at Hugo von Hofmannsthal’s and recorded in his diary that Strauss had spoken in favor of a dictatorship. But the composer had little to say about Hitler himself. The name first crops up in Strauss’s published utterances in November 1932, when, in the wake of the most recent German elections, he matter-of-factly wrote, “Hitler is apparently finished.”

Certain of Hitler’s defining musical experiences took place against the familiar backdrop of Austria in the spring of 1906. He made his first trip to Vienna at the beginning of May, venturing forth from his hometown of Linz. On May 7 he sent his friend August Kubizek a postcard mentioning that he would see Tristan at the Court Opera the following night and The Flying Dutchman the night after. In a second card he gave his impression of the acoustics: “Powerful waves of sound flood the room, and the murmur of the wind gives way to a terrible frenzy of surging sound.” The third card said: “Today 7:30–12 Tristan.” Hitler stayed in Vienna for several more weeks, and he would have had time to go see Salome in Graz. Manfred Blumauer, the only scholar who has thoroughly investigated the matter, leaves open the unanswerable question of whether or not Hitler actually made the trip. Either way, he did tell Franz and Alice Strauss, in 1933 or 1934, that he had attended the Graz performance. Alice recounted the conversation to Blumauer decades later. At this meeting or another like it, Hitler apparently kissed Alice’s hand, despite the fact that she was Jewish.