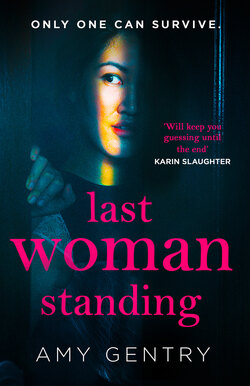 ‘A twisty and engrossing thriller that will keep you guessing until the very end.’ Karin Slaughter, International Bestselling AuthorHumiliated by a man who held her career in his hands, Dana Diaz’s life and reputation are in tatters.Drowning her sorrows one night in a bar, she gets talking to a stranger, Amanda – and finds that she, too, has a story to tell.Over a drink, Amanda proposes a plan:The women should take revenge on each other’s behalf.Stalking and tormenting the people that wronged them carries a thrill – and one act of revenge soon leads to another. But while this may be an addictive game for two, only one can survive.WHO WILL BE THE LAST WOMAN STANDING?Readers love Last Woman Standing:‘This book blew me away’ Cosy Cat Reviews‘A fantastic read’ Rachel‘What a page turner!’ Jane‘I highly recommend Last Woman Standing … This novel does not disappoint … FIVE-STAR’ D.B. Moone‘Timely and suspenseful’ Ray J.‘A unique story … This one will stick with me’ Courtney‘A riveting page turner you’ll stay up way too late to finish’ SW

AMY GENTRY is the author of Good as Gone, a New York Times Book Review Notable Book. She is also a book reviewer and essayist whose work has appeared in numerous outlets, including the Chicago Tribune, Salon, the Paris Review, the Los Angeles Review of Books, and the Austin Chronicle. She holds a PhD in English from the University of Chicago and lives in Austin, Texas.

“Yeah, me too,” I lied, suddenly thinking of a pilot idea: Failed actress opens community theater in her hometown. Waiting for Guffman meets Crazy Ex-Girlfriend. I fiddled with my napkin, wishing I’d brought my pen. “You probably got there right before I left. Let’s see . . .” I began running through an inventory of places we might have bumped into each other, listing improv theaters, acting workshops, networking events, even the Culver City diner where I’d waited tables. At every name, she shook her head. We’d just missed each other, although as I listed potential sources of connection, the familiar feeling strengthened rather than weakened. “Who did you hang out with there?” I asked.

“No one, really. I lost all my friends when I lost my job in tech.” She saw my questioning look and elaborated. “I was a programmer for Runnr.”