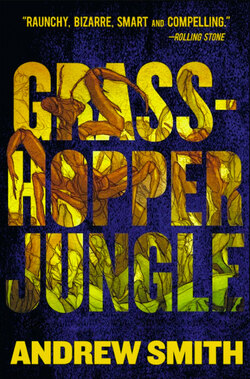 If you're a fan of John Green, Michael Grant, Stephen King or Sally Green's Half Bad, get your pincers stuck into this.In the small town of Ealing, Iowa, Austin and his best friend Robby have accidentally unleashed an unstoppable army. An army of horny, hungry, six-foot-tall praying mantises that only want to do two things. This is the truth. This is history. It’s the end of the world. And nobody knows anything about it.Funny, intense, complex and brave, Grasshopper Jungle is a groundbreaking, genre-bending, coming-of-age stunner.Look out for the highly anticipated sequel Exile from Eden.Praise for Grasshopper Jungle:‘A cool/passionate, gay/straight, male/female, absurd/real, funny/moving, past/present, breezy/profound masterpiece of a book.' Michael Grant, bestselling author of the GONE series.‘If you only read one book this year about sexually confused teens battling 6 foot tall head-chomping praying mantises in small town America, make it this one.' Charlie Higson, author of the bestselling Young Bond series.‘Grasshopper Jungle by Andrew Smith. You must read immediately. It’s an absolute joy. Scary, funny, sexy. Trust me.’ Jake Shears, lead singer of The Scissor Sisters‘Not for the faint-hearted. Mutant grasshoppers, rampant lust – a tale of teen self discovery that grips like a mating mantis.’ MetroAndrew Smith has always wanted to be a writer. After graduating college, he wrote for newspapers and radio stations, but found it wasn't the kind of writing he'd dreamed about doing. Born with an impulse to travel, Smith, the son of an immigrant, bounced around the world and from job to job, before settling down in Southern California. There, he got his first ‘real job’, as a teacher in an alternative educational program for at-risk teens, married, and moved to a rural mountain location. Smith has now written several award-winning YA novels including Winger, Stick, and Grasshopper Jungle.

Ealing, Iowa, is a fictional town. None of the characters and places in this book actually exist. Any similarities between events and characters to actual history only occur in the true portions of this book, which aren’t that many.

I felt especially virile doing a pull-up to get myself onto the ladder after him.

Soon, we were up on the roof, where we could stand and look down at the dismal, cancerous sprawl of Ealing.