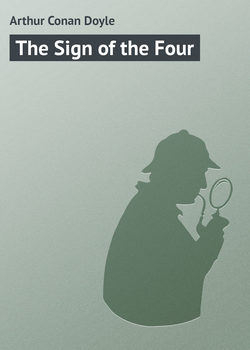 Sherlock Holmes is sitting in a cocaine-induced haze until the arrival of a distressed and beautiful young lady forces the great detective into action. Each year following the strange disappearance of her father, Miss Morstan has received a present of a rare and lustrous pearl. Now, on the day she is summoned to meet her anonymous benefactor, she consults Holmes and Watson.

Chapter I. The Science of Deduction

Chapter II. The Statement of the Case

Chapter III. In Quest of a Solution

Chapter IV. The Story of the Bald-Headed Man

Chapter VII. The Episode of the Barrel

Chapter IX. A Break in the Chain

Chapter X. The End of the Islander

Miss Morstan entered the room with a firm step and an outward composure of manner. She was a blonde young lady, small, dainty, well gloved, and dressed in the most perfect taste. There was, however, a plainness and simplicity about her costume which bore with it a suggestion of limited means. The dress was a sombre grayish beige, untrimmed and unbraided, and she wore a small turban of the same dull hue, relieved only by a suspicion of white feather in the side. Her face had neither regularity of feature nor beauty of complexion, but her expression was sweet and amiable, and her large blue eyes were singularly spiritual and sympathetic. In an experience of women which extends over many nations and three separate continents, I have never looked upon a face which gave a clearer promise of a refined and sensitive nature. I could not but observe that as she took the seat which Sherlock Holmes placed for her, her lip trembled, her hand quivered, and she showed every sign of intense inward agitation.

"I have come to you, Mr. Holmes," she said, "because you once enabled my employer, Mrs. Cecil Forrester, to unravel a little domestic complication. She was much impressed by your kindness and skill."

Well, really, this is a very pretty little mystery. What do you intend to do, Miss Morstan?"

"That is exactly what I want to ask you."