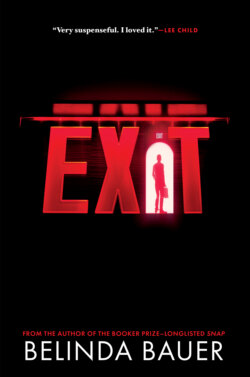 From the award-winning author of Snap and Rubbernecker , Exit is the story of Felix Pink, an older man with a group that helps people who have chosen to die with dignity. But there’s been a mistake, and Felix’s life is about to change forever. Belinda Bauer is “Britain’s most original crime writer” ( Crime Scene ), one of the few authors in the genre to be longlisted for the Man Booker prize. Now she returns with a heart-pounding, heartbreaking, and often hilarious new crime novel in which it’s never too late for life to go fatally wrong. Felix Pink is retired. Widowed for more than a decade, a painfully literal thinker, he has led a life of routine and is, not unhappily, waiting to die a hopefully boring death. He occupies himself volunteering as an Exiteer—someone who sits with terminally ill people as they die by suicide, assisting with logistics and lending moral support, then removing the evidence so that family and friends are not implicated in the death. When Felix lets himself in to Number 3 Black Lane, he’s there to perform an act of kindness and charity: to keep a dying man company as he takes his final breath. But just fifteen minutes later Felix is on the run from the police—after making the biggest mistake of his life. Now his routine world is turned upside down as he tries to discover whether what went wrong was a simple mistake—or deliberate. Murder. Belinda Bauer continues to redefine the boundaries of crime fiction, with a novel that is part murder mystery, part coming-of-old-age story—however short that future may be. With the compassion and dark humor of Jonas Jonasson and the twisted thriller plotting of Rear Window , Exit is a novel readers will not soon forget.

The trouble was, he now wore it all the time! It was warm but not hot. It machine-washed, and dried in a jiffy, looking like new, and it went with everything else in his wardrobe, somehow making the smart look casual and the casual look smarter. On principle, Felix had spent ten years looking for something more suitable to replace it with when it finally wore out, but it never did wear out, and he was far too much a man of his generation to dream of discarding something when it was still entirely serviceable, even if he had an existential crisis every time he wore it.

He closed the wardrobe door, went downstairs and watched the recording of that afternoon’s Countdown.