Susy, a Story of the Plains 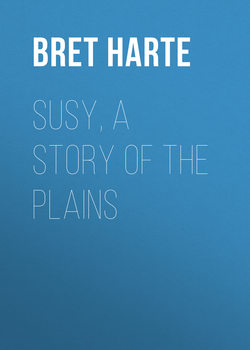 Bret Harte. Susy, a Story of the Plains

It was not thought inconsistent with Susy’s capriciousness that she should declare her intention the next morning of driving her pony buggy to Santa Inez to anticipate the stage-coach and fetch Mary Rogers from the station. Mrs. Peyton, as usual, supported the young lady’s whim and opposed her husband’s objections.

“Because the stage-coach happens to pass our gate, John, it is no reason why Susy shouldn’t drive her friend from Santa Inez if she prefers it. It’s only seven miles, and you can send Pedro to follow her on horseback to see that she comes to no harm.”

They were wiry, slender brutes of Mojave Indian blood, only lately broken to harness, and still undisciplined in temper. The lash sent them rearing into the air, where, forgetting themselves in the slackened traces and loose reins, they came down with a succession of bounds that brought the light buggy leaping after them with its wheels scarcely touching the ground. That unlucky lash had knocked away the bonds of a few months’ servitude and sent the half-broken brutes instinctively careering with arched backs and kicking heels into the field towards the nearest cover.

Mary Rogers cast a hurried glance over her shoulder. Alas, they had not calculated on the insidious levels of the terraced plain, and the faithful Pedro had suddenly disappeared; the intervention of six inches of rising wild oats had wiped him out of the prospect and their possible salvation as completely as if he had been miles away. Nevertheless, the girls were not frightened; perhaps they had not time. There was, however, the briefest interval for the most dominant of feminine emotions, and it was taken advantage of by Susy.