In The Days of Giants: A Book of Norse Tales 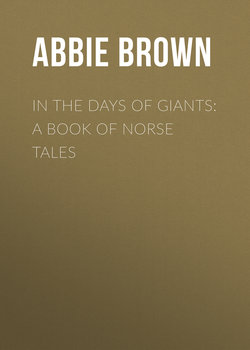 Brown Abbie Farwell. In The Days of Giants: A Book of Norse Tales

THE BEGINNING OF THINGS

HOW ODIN LOST HIS EYE

THE QUEST OF THE HAMMER

THE GIANTESS WHO WOULD NOT

THOR'S VISIT TO THE GIANTS

IN THE GIANT'S HOUSE

BALDER AND THE MISTLETOE

THE PUNISHMENT OF LOKI

In one place at the roots of Yggdrasil was a fair fountain called the Urdar-well, where the three Norn-maidens, who knew the past, present, and future, dwelt with their pets, the two white swans. This was magic water in the fountain, which the Norns sprinkled every day upon the giant tree to keep it green, – water so sacred that everything which entered it became white as the film of an eggshell. Close beside this sacred well the Æsir had their council hall, to which they galloped every morning over the rainbow bridge.

But Father Odin, the king of all the Æsir, knew of another fountain more wonderful still; the two ravens whom he sent forth to bring him news had told him. This also was below the roots of Yggdrasil, in the spot where the sky and ocean met. Here for centuries and centuries the giant Mimer had sat keeping guard over his hidden well, in the bottom of which lay such a treasure of wisdom as was to be found nowhere else in the world. Every morning Mimer dipped his glittering horn Giöll into the fountain and drew out a draught of the wondrous water, which he drank to make him wise. Every day he grew wiser and wiser; and as this had been going on ever since the beginning of things, you can scarcely imagine how wise Mimer was.

"Dear maiden," said Odin, "I have come a long, long distance to see you. Will you not bid me stay a little while?"

Gunnlöd looked at him kindly. "Who are you, and whence do you come so far to see me?" she asked.