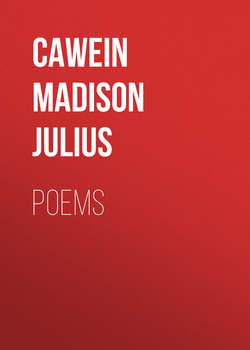 THE POETRY OF MADISON CAWEIN

THE IDYLL OF THE STANDING STONE

A DREAMER OF DREAMS

DEEP IN THE FOREST

I. SPRING ON THE HILLS

IN THE SHADOW OF THE BEECHES

THE WIND OF SPRING

"BELOW THE SUNSET'S RANGE OF ROSE"

ONE WHO LOVED NATURE

DUSK IN THE WOODS

THE GARDEN OF DREAMS

THE PATH TO FAERY

THE SPIRIT OF THE FOREST SPRING

THE WINDOW ON THE HILL

INTIMATIONS OF THE BEAUTIFUL

THE WIND OF WINTER

EVENING ON THE FARM

"THE MORN THAT BREAKS ITS HEART OF GOLD"

A VOICE ON THE WIND

A MAID WHO DIED OLD

THE AGE OF GOLD

THE END OF SUMMER

THE DEATH OF LOVE

When a poet begins writing, and we begin liking his work, we own willingly enough that we have not, and cannot have, got the compass of his talent. We must wait till he has written more, and we have learned to like him more, and even then we should hesitate his definition, from all that he has done, if we did not very commonly qualify ourselves from the latest thing he has done. Between the earliest thing and the latest thing there may have been a hundred different things, and in his swan-long life of a singer there would probably be a hundred yet, and all different. But we take the latest as if it summed him up in motive and range and tendency. Many parts of his work offer themselves in confirmation of our judgment, while those which might impeach it shrink away and hide themselves, and leave us to our precipitation, our catastrophe.

It was surely nothing less than by a catastrophe that I should have been so betrayed in the volumes of Mr. Cawein's verse which reached me last before the volume of his collected poems…. I had read his poetry and loved it from the beginning, and in each successive expression of it, I had delighted in its expanding and maturing beauty. I believe I had not failed to own its compass, and when—

An interesting and charming trait of his poetry is its constant theme of youth and its limit within the range that the emotions and aspirations of youth take. He might indeed be called the poet of youth if he resented being called the poet of nature; but the poet of youth, be it understood, of vague regrets, of "tears, idle tears," of "long, long thoughts," for that is the real youth, and not the youth of the supposed hilarity, the attributive recklessness, the daring hopes. Perhaps there is some such youth as this, but it has not its home in the breast of any young poet, and he rarely utters it; at best he is of a light melancholy, a smiling wistfulness, and upon the whole, October is more to his mind than May.

In Mr. Cawein's work, therefore, what is not the expression of the world we vainly and rashly call the inanimate world, is the hardly more dramatized, and not more enchantingly imagined story of lovers, rather unhappy lovers. He finds his own in this sort far and near; in classic Greece, in heroic England, in romantic Germany, where the blue flower blows, but not less in beautiful and familiar Kentucky, where the blue grass shows itself equally the emblem of poetry, and the moldering log in the cabin wall or the woodland path is of the same poetic value as the marble of the ruined temple or the stone of the crumbling castle. His singularly creative fancy breathes a soul into every scene; his touch leaves everything that was dull to the sense before glowing in the light of joyful recognition. He classifies his poems by different names, and they are of different themes, but they are after all of that unity which I have been trying, all too shirkingly, to suggest. One, for instance, is the pathetic story which tells itself in the lyrical eclogue "One Day and Another." It is the conversation, prolonged from meeting to meeting, between two lovers whom death parts; but who recurrently find themselves and each other in the gardens and the woods, and on the waters which they tell each other of and together delight in. The effect is that which is truest to youth and love, for these transmutations of emotion form the disguise of self which makes passion tolerable; but mechanically the result is a series of nature poems. More genuinely dramatic are such pieces as "The Feud," "Ku Klux," and "The Lynchers," three out of many; but one which I value more because it is worthy of Wordsworth, or of Tennyson in a Wordsworthian mood, is "The Old Mill," where, with all the wonted charm of his landscape art, Mr. Cawein gives us a strongly local and novel piece of character painting.