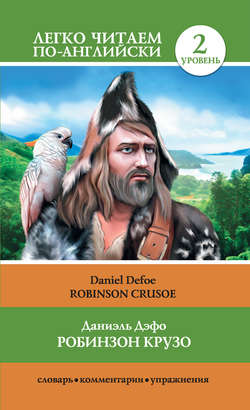 I was born in the year 1632, in the city of York. That was my mother’s hometown, because she also was born there, in a family of Robinson’s. They were very old and gentle family of York’s faubourg,[1] from whom I was called Robinson. My father, bored the name Kreutznaer, was German from Bremen. He earned his bread[2] by trading, and, when his case went to the mountain,[3] he moved to England, York. There he met my mother and later they got married. Eventually, the surname Kreutznaer grown into the Crusoe, by the usual corruption of words in England. Therefore, everyone calls me Robinson Crusoe.

I had two elder brothers. One of them went to the army, despite of my father’s prohibitions, and was killed at the battle near Dunkirk. What became of the second brother we never knew, he was missing.

By noon the sea went very high. Once or twice we thought, that our anchor had come home; upon which our master ordered out the sheet-anchor,[25] so that we rode with two anchors ahead.

By this time it blew a terrible storm indeed. Anyone may judge, what a condition I must been in at all this, who was such a young sailor, and was so frightened in a first little storm. But not the fear of death scared me. It seemed like a Providence punishment.[26] I had broken my oath, which I gave during the first storm. Now it seemed clear, what fate awaits me, if I don’t return home. And these, added to the terror of the storm, put me into such a condition, that I have no words to describe it.