The History of the Devil, As Well Ancient as Modern: In Two Parts 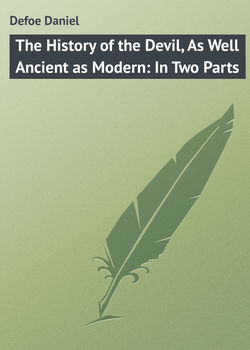 Defoe Daniel. The History of the Devil, As Well Ancient as Modern: In Two Parts

THE PREFACE TO THE SECOND EDITION

PART II. OF THE MODERN HISTORY OF THE DEVIL

This Second Edition of this Work, notwithstanding a large Impression of the First, is a Certificate from the World of its general Acceptation; so we need not, according to the Custom of Editors, boast of it without Evidence, or tell a F – b in its Favour.

Upon this supposed personality and superiority of Satan, or, as I call it, the sovereignty and government of one Devil above all the rest; I say, upon this notion are form’d all the systems of the dark side of futurity, that we can form in our minds: And so general is the opinion of it, that it will hardly bear to be oppos’d by any other argument, at least that will bear to be reason’d upon: All the notions of a parity of Devils, or making a common-wealth among the black Divan, seem to be enthusiastick and visionary, but with no consistency or certainty, and is so generally exploded, that we must not venture so much as to debate the point.

Taking it then as the generality of mankind do, that there is a Grand Devil, a superior of the whole black race; that they all fell, together with their General, Satan, at the head of them; that tho’ he, Satan, could not maintain his high station in Heaven, yet that he did continue his dignity among the rest, who are call’d his servants, in Scripture his Angels; that he has a kind of dominion or authority over the rest, and that they were all, how many millions soever in number, at his command; employ’d by him in all his hellish designs, and in all his wicked contrivances for the destruction of man, and for the setting up his own kingdom in the world.