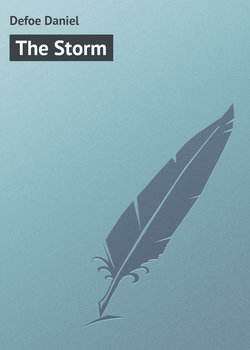 CHAPTER I. Of the Natural Causes and Original of Winds

CHAPTER II. Of the Opinion of the Ancients, That this Island was more Subject to Storms than other Parts of the World

CHAPTER III. Of the Storm in General

CHAPTER IV. Of the Extent of this Storm, and from what Parts it was suppos'd to come; with some Circumstances as to the Time of it

OF THE EFFECTS OF THE STORM

I. Of the Damages in the City of London, and Parts adjacent

II. Of the Damages in the Country

Of the Damages on the Water

Though a System of Exhalation, Dilation, and Extension, things which the Ancients founded the Doctrine of Winds upon, be not my direct Business; yet it cannot but be needful to the present Design to Note, that the Difference in the Opinions of the Ancients, about the Nature and Original of Winds, is a Leading Step to one Assertion which I have advanc'd in all that I have said with Relation to Winds, viz. That there seems to be more of God in the whole Appearance, than in any other Part of Operating Nature.

Nor do I think I need explain my self very far in this Notion: I allow the high Original of Nature to be the Great Author of all her Actings, and by the strict Rein of his Providence, is the Continual and Exact Guide of her Executive Power; but still 'tis plain that in Some of the Principal Parts of Nature she is Naked to our Eye, Things appear both in their Causes and Consequences, Demonstration gives its Assistance, and finishes our further Enquiries: for we never enquire after God in those Works of Nature which depending upon the Course of Things are plain and demonstrative; but where we find Nature defective in her Discovery, where we see Effects but cannot reach their Causes; there 'tis most just, and Nature her self seems to direct us to it, to end the rational Enquiry, and resolve it into Speculation: Nature plainly refers us beyond her Self, to the Mighty Hand of Infinite Power, the Author of Nature, and Original of all Causes.

'The Winds,' says the Learned Mr. Bohun, 'are generated in the Intermediate Space between the Earth and the Clouds, either by Rarefaction or Repletion, and sometimes haply by pressure of Clouds, Elastical Virtue of the Air, &c. from the Earth or Seas, as by Submarine or Subterraneal Eruption or Descension or Resilition from the middle Region.'

All this, though no Man is more capable of the Enquiry than this Gentleman, yet to the Demonstration of the thing, amounts to no more than what we had before, and still leaves it as Abstruse and Cloudy to our Understanding as ever.