Memoirs of a Cavalier 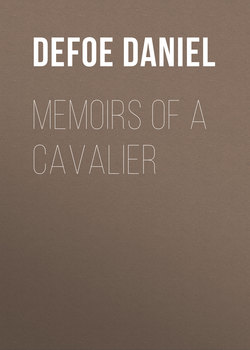 Defoe Daniel. Memoirs of a Cavalier

PREFACE TO THE FIRST EDITION

MEMOIRS OF A CAVALIER

As an evidence that 'tis very probable these Memorials were written many years ago, the persons now concerned in the publication assure the reader that they have had them in their possession finished, as they now appear, above twenty years; that they were so long ago found by great accident, among other valuable papers, in the closet of an eminent public minister, of no less figure than one of King William's secretaries of state.

As it is not proper to trace them any farther, so neither is there any need to trace them at all, to give reputation to the story related, seeing the actions here mentioned have a sufficient sanction from all the histories of the times to which they relate, with this addition, that the admirable manner of relating them and the wonderful variety of incidents with which they are beautified in the course of a private gentleman's story, add such delight in the reading, and give such a lustre, as well to the accounts themselves as to the person who was the actor, that no story, we believe, extant in the world ever came abroad with such advantage.

In all his accounts he does justice to his enemies, and honours the merit of those whose cause he fought against; and many accounts recorded in his story, are not to be found even in the best histories of those times.

What applause does he give to gallantry of Sir Thomas Fairfax, to his modesty, to his conduct, under which he himself was subdued, and to the justice he did the king's troops when they laid down their arms!