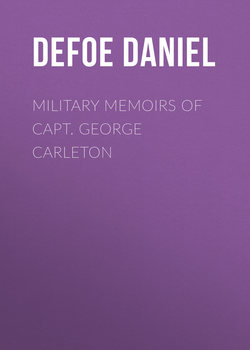 MEMOIRS OF AN English Officer, &c

The Author of these Memoirs began early to distinguish himself in martial Affairs, otherwise he could not have seen such Variety of Actions both by Sea and Land. After the last Dutch War he went into Flanders, where he not only serv'd under the Command of his Highness the Prince of Orange, whilst he was Generalissimo of the Dutch Forces, but likewise all the time he reign'd King of Great Britain. Most of the considerable Passages and Events, which happened during that time, are contained in the former Part of this Book.

In the Year 1705, the Regiment in which he serv'd as Captain was order'd to embark for the West Indies; and he, having no Inclination to go thither, chang'd with an half-pay Captain; and being recommended to the Earl of Peterborow by the late Lord Cutts, went with him upon that noble Expedition into Spain.

When the Forces under his Lordship's Command were landed near Barcelona, the Siege of that Place was thought by several impracticable, not only for want of experienc'd Engineers, but that the Besieged were as numerous as the Besiegers; yet the Courage of that brave Earl surmounted those Difficulties, and the Siege was resolv'd upon.

Our Author having obtain'd, by his long Service, some Knowledge of the practick Part of an Engineer, and seeing at that critical Time the great Want of such, readily acted as one, which gave him the greater Opportunity of being an Eye-Witness of his Lordship's Actions; and consequently made him capable of setting them forth in these his Memoirs.