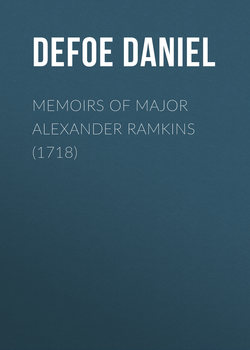 THE PUBLISHER TO THE READER

THE MEMOIRS OF Alexander Ramkins, &c

I was not above Seventeen Years of Age when the Battle of Gillycranky was fought between the Two Highland Generals, the Lord Viscount Dundee and Mackay. And being then a Stripling at the University of Aberdeen and understanding that several Clans were gathering into a Body in defence of King James III sold my Books and Furniture of my Lodgings, and equipp'd my self to observe the Martial Call, I found my self prompted with. I arriv'd in a few Days near the Field of Battle, and joyn'd my self with a broken Body of Men who were making up towards the Mountains to recover themselves after the Fatigue of Battle. The Noviceship I went through in the Highlands, was no improper Foundation for the course Method of living I have been since engag'd in for above Twenty Seven Years; during which Time, I have run through all those Hardships which are incident to one who seeks a Preferment in Fire and Smoak.

While I strolled about in the Highlands, it was my good Fortune to be under the Tuition of an old Officer, who let me into many of those little Secrets which are not unserviceable to such as Design to make the whole Earth the Theatre of their Life; but what I chiefly valued this old Gentleman's Conversation for, was the Happiness I had to be a Hearer of some of his Politick Lessons, of which he was a great Master, having furnish'd himself by Fifty Years Practice, with the best Idea's of that kind.

But to cut short this Digression, the time now drew near that I was to undertake my intended Ramble, and indeed it was high time; for it being whisper'd about in the Neighbourhood that I had been in Arms for King James II. Home, as the saying is, was too hot a Place for me; so I sent my Servant to enquire for a Conveniency to pass over to Flanders, and in two Days I was provided with a Roterdam Vessel, and so with very little Ceremony took leave of my Mother, who though she was unwilling to part with me, yet she prefer'd the lesser Danger to the greater, and rather wish'd me expos'd to the Waves, than to the Insults of my Enemies at Home.

The Wind blew very fresh, but tacking about too much to the North East, it drove us upon Shore with that violence that we were oblig'd to put in twice to Land, once at Scarborough, and again at Yarmouth.