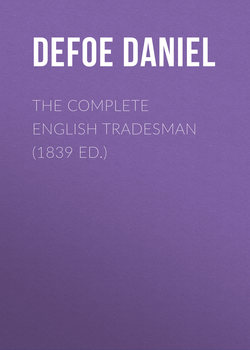 CHAPTER I. THE TRADESMAN IN HIS PREPARATIONS WHILE AN APPRENTICE

CHAPTER IV. OF THE TRADESMAN ACQUAINTING HIMSELF WITH ALL BUSINESS IN GENERAL

CHAPTER VII. OF THE TRADESMAN IN DISTRESS, AND BECOMING BANKRUPT

CHAPTER VIII. THE ORDINARY OCCASIONS OF THE RUIN OF TRADESMEN

CHAPTER IX. OF OTHER REASONS FOR THE TRADESMAN'S DISASTERS: AND, FIRST, OF INNOCENT DIVERSIONS

CHAPTER X. OF EXTRAVAGANT AND EXPENSIVE LIVING; ANOTHER STEP TO A TRADESMAN'S DISASTER

CHAPTER XI. OF THE TRADESMAN'S MARRYING TOO SOON

CHAPTER XII. OF THE TRADESMAN'S LEAVING HIS BUSINESS TO SERVANTS

CHAPTER XIII. OF TRADESMEN MAKING COMPOSITION WITH DEBTORS, OR WITH CREDITORS

CHAPTER XIV. OF THE UNFORTUNATE TRADESMAN COMPOUNDING WITH HIS CREDITORS

CHAPTER XV. OF TRADESMEN RUINING ONE ANOTHER BY RUMOUR AND CLAMOUR, BY SCANDAL AND REPROACH

CHAPTER XVI. OF THE TRADESMAN'S ENTERING INTO PARTNERSHIP IN TRADE, AND THE MANY DANGERS ATTENDING IT

CHAPTER XVII. OF HONESTY IN DEALING, AND LYING

CHAPTER XVIII. OF THE CUSTOMARY FRAUDS OF TRADE, WHICH HONEST MEN ALLOW THEMSELVES TO PRACTISE, AND PRETEND TO JUSTIFY

CHAPTER XX. OF THE TRADESMAN'S KEEPING HIS BOOKS, AND CASTING UP HIS SHOP

CHAPTER XXI. OF THE TRADESMAN LETTING HIS WIFE BE ACQUAINTED WITH HIS BUSINESS

CHAPTER XXII. OF THE DIGNITY OF TRADE IN ENGLAND MORE THAN IN OTHER COUNTRIES

CHAPTER XXIII. OF THE INLAND TRADE OF ENGLAND, ITS MAGNITUDE, AND THE GREAT ADVANTAGE IT IS TO THE NATION IN GENERAL

CHAPTER XXIV. OF CREDIT IN TRADE, AND HOW A TRADESMAN OUGHT TO VALUE AND IMPROVE IT: HOW EASILY LOST, AND HOW HARD IT IS TO BE RECOVERED

CHAPTER XXV. OF THE TRADESMAN'S PUNCTUAL PAYING HIS BILLS AND PROMISSORY NOTES UNDER HIS HAND, AND THE CREDIT HE GAINS BY IT

Being to direct this discourse to the tradesmen of this nation, it is needful, in order to make the substance of this work and the subject of it agree together, that I should in a few words explain the terms, and tell the reader who it is we understand by the word tradesman, and how he is to be qualified in order to merit the title of complete.

This is necessary, because the said term tradesman is understood by several people, and in several places, in a different manner: for example, in the north of Britain, and likewise in Ireland, when you say a tradesman, you are understood to mean a mechanic, such as a smith, a carpenter, a shoemaker, and the like, such as here we call a handicraftsman. In like manner, abroad they call a tradesman such only as carry goods about from town to town, and from market to market, or from house to house, to sell; these in England we call petty chapmen, in the north pethers, and in our ordinary speech pedlars.

It was an odd circumstance of a tradesman in this city a few years ago, who, being out of his time, and going to solicit one of his master's customers to trade with him, the chapman did not so much as know him, or remember that he had ever heard his name, except as he had heard his master call his apprentice Jacob. I know some masters diligently watch to prevent their apprentices speaking to their customers, and to keep them from acquainting themselves with the buyers, that when they come out of their times they may not carry the trade away with them.

To hinder an apprentice from an acquaintance with the dealers of both sorts, is somewhat like Laban's usage of Jacob, namely, keeping back the beloved Rachel, whom he served his seven years' time for, and putting him off with a blear-eyed Leah in her stead; it is, indeed, a kind of robbing him, taking from him the advantage which he served his time for, and sending him into the world like a man out of a ship set on shore among savages, who, instead of feeding him, are indeed more ready to eat him up and devour him.7