The Gold Sickle; Or, Hena, The Virgin of The Isle of Sen. A Tale of Druid Gaul 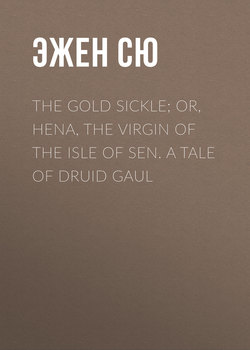 Эжен Сю. The Gold Sickle; Or, Hena, The Virgin of The Isle of Sen. A Tale of Druid Gaul

[A] Gallic word for chief.

All these threatening signs notwithstanding, the unknown rider seemed nowise thankful for the hospitality that Joel and his son had pressed upon him. Extended on the bottom of the chariot he was pale with rage. He ground his teeth and puffed at his mouth. But keeping his anger to himself he said not a word. Joel (it must be admitted) passionately loved a story, but he also passionately loved to talk. He turned to the stranger:

"My guest, for such you are now, I give thanks to Teutates, the god of travelers, for having sent me a guest. You should know who I am. Yes, I must tell you who I am, seeing you are to sit down at my hearth;" and unaffected by the stranger's gesture of anger, which seemed to say he cared not to know who Joel was, the latter proceeded:

Нет рецензий. Будьте первым, кто напишет рецензию на книгу The Gold Sickle; Or, Hena, The Virgin of The Isle of Sen. A Tale of Druid Gaul