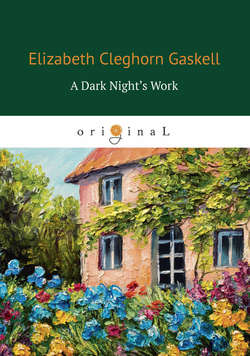 A Dark Night’s Work turns on concealed crime and a false accusation of murder. The secret goes unknown for about 15 years until the body is dug up during the construction of a railroad… The manslaughter and resulting misery for those involved is used by Gaskell to illustrate the effects of dishonesty and bad living, and the torment of conscience.

In the county town of a certain shire there lived (about forty years ago) one Mr. Wilkins, a conveyancing attorney of considerable standing.

The certain shire was but a small county, and the principal town in it contained only about four thousand inhabitants; so in saying that Mr. Wilkins was the principal lawyer in Hamley, I say very little, unless I add that he transacted all the legal business of the gentry for twenty miles round. His grandfather had established the connection; his father had consolidated and strengthened it, and, indeed, by his wise and upright conduct, as well as by his professional skill, had obtained for himself the position of confidential friend to many of the surrounding families of distinction. He visited among them in a way which no mere lawyer had ever done before; dined at their tables – he alone, not accompanied by his wife, be it observed; rode to the meet occasionally as if by accident, although he was as well mounted as any squire among them, and was often persuaded (after a little coquetting about “professional engagements,” and “being wanted at the office”) to have a run with his clients; nay, once or twice he forgot his usual caution, was first in at the death, and rode home with the brush. But in general he knew his place; as his place was held to be in that aristocratic county, and in those days. Nor let be supposed that he was in any way a toadeater. He respected himself too much for that. He would give the most unpalatable advice, if need were; would counsel an unsparing reduction of expenditure to an extravagant man; would recommend such an abatement of family pride as paved the way for one or two happy marriages in some instances; nay, what was the most likely piece of conduct of all to give offence forty years ago, he would speak up for an unjustly-used tenant; and that with so much temperate and well-timed wisdom and good feeling, that he more than once gained his point. He had one son, Edward. This boy was the secret joy and pride of his father’s heart. For himself he was not in the least ambitious, but it did cost him a hard struggle to acknowledge that his own business was too lucrative, and brought in too large an income, to pass away into the hands of a stranger, as it would do if he indulged his ambition for his son by giving him a college education and making him into a barrister. This determination on the more prudent side of the argument took place while Edward was at Eton. The lad had, perhaps, the largest allowance of pocket-money of any boy at school; and he had always looked forward to going to Christ Church along with his fellows, the sons of the squires, his father’s employers. It was a severe mortification to him to find that his destiny was changed, and that he had to return to Hamley to be articled to his father, and to assume the hereditary subservient position to lads whom he had licked in the play-ground, and beaten at learning.

The clients re-echoed Mr. Wilkins’s words, and spoke of Mr. Dunster as invaluable to his master; a thorough treasure, the very saving of the business. They had not been better attended to, not even in old Mr. Wilkins’s days; such a clear head, such a knowledge of law, such a steady, upright fellow, always at his post. The grating voice, the drawling accent, the bottle-green coat, were nothing to them; far less noticed, in fact, than Wilkins’s expensive habits, the money he paid for his wine and horses, and the nonsense of claiming kin with the Welsh Wilkinses, and setting up his brougham to drive about –shire lanes, and be knocked to pieces over the rough round paving-stones thereof.

All these remarks did not come near Ellinor to trouble her life. To her, her dear father was the first of human beings; so sweet, so good, so kind, so charming in conversation, so full of accomplishment and information! To her healthy, happy mind every one turned their bright side. She loved Miss Monro – all the servants – especially Dixon, the coachman. He had been her father’s playfellow as a boy, and, with all his respect and admiration for his master, the freedom of intercourse that had been established between them then had never been quite lost. Dixon was a fine, stalwart old fellow, and was as harmonious in his ways with his master as Mr. Dunster was discordant; accordingly he was a great favourite, and could say many a thing which might have been taken as impertinent from another servant.