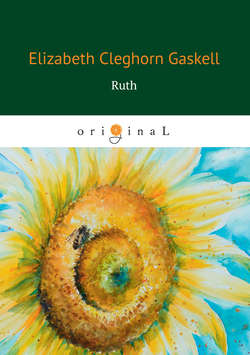 A fallen woman would seem a less-than-ideal choice for a Victorian heroine. Elizabeth Gaskell courageously created just such a portrait in her Ruth. Overturning the conventional assumption that a woman once seduced is condemned to exclusion from respectable society, Gaskell draws a heroine whose emotional honesty, innate morality, and the love she shares with her illegitimate son are suffi cient for redemption.

Chapter I. The Dressmaker's Apprentice at Work

Chapter X. A Note and the Answer

Chapter XVI. Sally Tells of Her Sweethearts, and Discourses on the Duties of Life

Chapter XXII. The Liberal Candidate and His Precursor

Chapter XXIV. The Meeting on the Sands

Chapter XXVII. Preparing to Stand on the Truth

Chapter XXVIII. An Understanding Between Lovers

Chapter XXIX. Sally Takes Her Money Out of the Bank

Chapter XXXI. An Accident to the Dover Coach

Chapter XXXIII. A Mother to Be Proud Of

Chapter XXXIV "I Must Go and Nurse Mr. Bellingham"

Chapter XXXV. Out of Darkness into Light

There is an assize-town in one of the eastern counties which was much distinguished by the Tudor sovereigns, and, in consequence of their favour and protection, attained a degree of importance that surprises the modern traveller.

A hundred years ago its appearance was that of picturesque grandeur. The old houses, which were the temporary residences of such of the county-families as contented themselves with the gaieties of a provincial town, crowded the streets and gave them the irregular but noble appearance yet to be seen in the cities of Belgium. The sides of the streets had a quaint richness, from the effect of the gables, and the stacks of chimneys which cut against the blue sky above; while, if the eye fell lower down, the attention was arrested by all kinds of projections in the shape of balcony and oriel; and it was amusing to see the infinite variety of windows that had been crammed into the walls long before Mr Pitt's days of taxation. The streets below suffered from all these projections and advanced stories above; they were dark, and ill-paved with large, round, jolting pebbles, and with no side-path protected by kerb-stones; there were no lamp-posts for long winter nights; and no regard was paid to the wants of the middle class, who neither drove about in coaches of their own, nor were carried by their own men in their own sedans into the very halls of their friends. The professional men and their wives, the shopkeepers and their spouses, and all such people, walked about at considerable peril both night and day. The broad unwieldy carriages hemmed them up against the houses in the narrow streets. The inhospitable houses projected their flights of steps almost into the carriage-way, forcing pedestrians again into the danger they had avoided for twenty or thirty paces. Then, at night, the only light was derived from the glaring, flaring oil-lamps hung above the doors of the more aristocratic mansions; just allowing space for the passers-by to become visible, before they again disappeared into the darkness, where it was no uncommon thing for robbers to be in waiting for their prey.

"I'll set thee a craddy, Tom! Thou dar'n't go over yon black line in the water, out into the real river."

Of course the challenge was not to be refused, and Tom paddled away towards the dark line, beyond which the river swept with smooth, steady current. Ruth (a child in years herself) stood at the top of the declivity watching the adventurer, but as unconscious of any danger as the group of children below. At their playfellow's success, they broke through the calm gravity of observation into boisterous marks of applause, clapping their hands, and stamping their impatient little feet, and shouting, "Well done, Tom; thou hast done it rarely!"