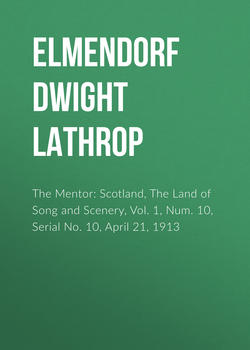 The Mentor “A Wise and Faithful Guide and Friend”

SCOTLAND. THE LAND OF SONG AND SCENERY

THE HOME OF BURNS

THE HOME OF SCOTT

THE CASTLES OF SCOTLAND

THE HOME OF MARY, QUEEN OF SCOTS

A fierce looking man who had lost his way stood on a beach of snow-white pebbles near a beautiful little glassy lake and blew a loud blast on the bugle which he held in his left hand. And almost immediately he dodged into a nearby thicket of bushes and stood there peering forth at a little skiff that came gliding toward the shore from underneath a gnarled oak tree overhanging the water. The only occupant of the boat was a beautiful young girl, who, after guiding it to a safe landing on the silvery strand, stepped gracefully out on the pebbles.

This was James Fitzjames’ first sight of Ellen, the heroine of Sir Walter Scott’s poem, “The Lady of the Lake,” which has immortalized for all time Loch Katrine in the Trossachs, Scotland. There in the lake sleeps Ellens Isle, the pretty little island on which the girl lived – and last secret fastness of her fierce clan.

All the country round about Loch Katrine has been made famous by Scott. Almost every spot has been the scene of one or more incidents in his novels. High above Callander rise Uamh Var, where the stag was started at the beginning of “The Lady of the Lake,” and Ben Crackie, with the wild Bracklin Fall, within the roar of whose waters the seer of Clan Alpine wrapped himself in the white bull’s hide to dream his dream. Northward from Callander lies the beautiful Pass of Seny, up which Duncraggan’s heir rushed with the Fiery Cross, to thrust it, at the door of the little kirk of St. Bride, into the hands of the new-wed Norman, heir of Armandave. And westward from Callander lie Coilantogle Ford, where James Fitzjames fought Roderick Dhu; Lanrick Mead, the fierce clan’s muster-place; and Duncraggan, scene of the Highland funeral.

The popularity of “The Lady of the Lake” has brought many visitors to Loch Katrine. This beautiful region is visited by hundreds of tourists each year.