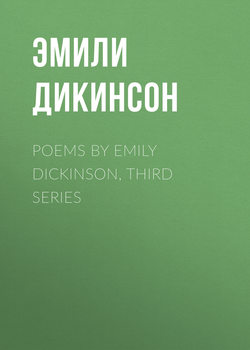 XIX. I HAD A GUINEA GOLDEN

V. WITH A FLOWER

XXVIII. THE COMING OF NIGHT

The intellectual activity of Emily Dickinson was so great that a large and characteristic choice is still possible among her literary material, and this third volume of her verses is put forth in response to the repeated wish of the admirers of her peculiar genius. Much of Emily Dickinson's prose was rhythmic, —even rhymed, though frequently not set apart in lines.

Also many verses, written as such, were sent to friends in letters; these were published in 1894, in the volumes of her Letters. It has not been necessary, however, to include them in this Series, and all have been omitted, except three or four exceptionally strong ones, as "A Book," and "With Flowers."

There is internal evidence that many of the poems were simply spontaneous flashes of insight, apparently unrelated to outward circumstance. Others, however, had an obvious personal origin; for example, the verses "I had a Guinea golden," which seem to have been sent to some friend travelling in Europe, as a dainty reminder of letter-writing delinquencies. The surroundings in which any of Emily Dickinson's verses are known to have been written usually serve to explain them clearly; but in general the present volume is full of thoughts needing no interpretation to those who apprehend this scintillating spirit.