The Clan Fraser in Canada: Souvenir of the First Annual Gathering 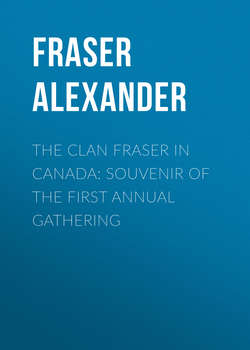 Fraser Alexander. The Clan Fraser in Canada: Souvenir of the First Annual Gathering

FORMATION OF THE CLAN FRASER IN CANADA

"The Clan in Canada."

DISCOVERER OF THE FRASER RIVER

THE Gael has proved himself not less a pioneer of civilization, and adaptable to changing conditions of living, than a lover of the traditions of his race, holding tenaciously by ancient usages and manners, and stirred profoundly by racial sentiment. As a pioneer he has reached "the ends of the earth," possessing the unoccupied parts of the world. As a patriot he has established not a few of his cherished customs in the land of his adoption. His love of kindred is probably his most notable characteristic; it found embodiment in the clan system, under which his race achieved its greatest triumphs and enjoyed its greatest glories, and the bond of clanship, with its inspiring memories, the true clansman will never disregard. While the clan system, as such, would be impracticable in the British colonies under present-day conditions, even more so than in its old home in the Highlands of Scotland, its spirit lives, leavening the system of government and exercising no small influence in the fusion of heterogeneous elements into new and distinct peoples.

These observations are applicable in a peculiar degree to Canada, where a very large number of clansmen have found a second Highland home. Many of the forests which rang with the clash of the claymore in the struggle for British supremacy, fell afterwards to the axe of the Gaelic settler. His trail lies across the continent, from ocean to ocean. His energy and intelligence have been honorably felt in every walk of life, and his enterprise and skill have done much to develop and upbuild the Dominion. No body of people occupies a more distinguished place in this respect than the Frasers; indeed, even among the clans, no name is more closely identified than that of "Fraser" with the early days of Canada. To tell of their services on the field, in government, in commerce, in the professions, would occupy a large volume, as would a similar story of other clans, and an attempt to do so, in an introductory chapter, would be altogether out of place, but there are a few events of importance to the country in which the Frasers figured to which it will be well to allude with fitting brevity.

The cold climate, it was feared, would prove too severe to the Frasers, who wore the kilt, and an attempt, kindly conceived, no doubt, was made to change the "garb of old Gaul" for the trews. The proposal aroused strenuous opposition; officers and men opposed the change and finally were successful. The strength of feeling awakened may be judged from the words of one of the soldiers in the regiment: "Thanks to our generous chief, we were allowed to wear the garb of our fathers, and, in the course of six winters, showed the doctors that they did not understand our constitution; for in the coldest winters our men were more healthy than those regiments that wore breeches and warm clothing." A somewhat amusing anecdote is related of how the Nuns of the Ursuline Convent, where the Frasers were quartered in 1759-60, endeavored to induce Governor Murray to be allowed to provide sufficient raiment for the kilted soldiers, but, of course, without success.

At Louisburg, Montmorenci, Ste. Foye and on the Plains of Abraham, the Frasers distinguished themselves greatly. One of the most eloquent tributes to their prowess was spoken by the Hon. P. J. O. Chauveau, the French-Canadian, at the inauguration in 1855 of the Statue of Bellona sent by Prince Napoleon for the monument erected on the famous battlefield. The French-Canadian historian Garneau, and other writers in whose veins courses the blood of the vanquished at Quebec, have borne generous testimony to their military bearing and good conduct. Garneau writes of the battle of Carillon, 1758: "It was the right of the trench works that was longest and most obstinately assailed; in that quarter the combat was most sanguinary. The British Grenadiers and Highlanders there persevered in the attack for three hours, without flinching or breaking rank. The Highlanders above all, under Lord John Murray, covered themselves with glory. They formed the troops confronting the Canadians, their light and picturesque costumes distinguishing them from all other soldiers amid the flames and smoke. The corps lost the half of its men, and twenty-five of its officers were killed or severely wounded;" and the genial Le Moine, half Highland and half French, says: "The Frasers of 1759 and of 1775 readily courted danger or death in that great duel which was to graft progress and liberty on that loved emblem of Canada, the pride of its forests – the Maple Tree. If at times one feels pained at the ferocity which marked the conflict and which won for Fraser's Highlanders at Quebec, the name Les Sauvages d'Ecosse,1 one feels relieved, seeing that the meeting was inevitable, that the sturdy sons of Caledonia, in Levis' heroic Grenadiers, did find a foe worthy of their steel. Scotchmen, on the field of Ste. Foye, in deadly encounter with France's impetuous warriors, doubtless acknowledged that the latter were not unworthy descendants of those whom they had helped to rout England's soldiery on the fields of Brangé, Crevant and Verneuil."