St. George for England: A Tale of Cressy and Poitiers 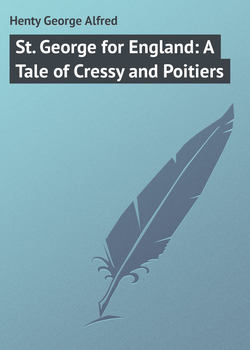 Henty George Alfred. St. George for England: A Tale of Cressy and Poitiers

CHAPTER I. A Wayfarer

CHAPTER II. THE HUT IN THE MARSHES

CHAPTER VIII. OFF TO THE WARS

CHAPTER IX. THE SIEGE OF HENNEBON

CHAPTER X. A PLACE OF REFUGE

CHAPTER XV. THE SIEGE OF A FORTALICE

CHAPTER XVII. THE CAPTURE OF CALAIS

CHAPTER XIX. BY LAND AND SEA

It was a bitterly cold night in the month of November, 1330. The rain was pouring heavily, when a woman, with a child in her arms, entered the little village of Southwark. She had evidently come from a distance, for her dress was travel-stained and muddy. She tottered rather than walked, and when, upon her arrival at the gateway on the southern side of London Bridge, she found that the hour was past and the gates closed for the night, she leaned against the wall with a faint groan of exhaustion and disappointment.

After remaining, as if in doubt, for some time, she feebly made her way into the village. Here were many houses of entertainment, for travelers like herself often arrived too late to enter the gates, and had to abide outside for the night. Moreover, house rent was dear within the walls of the crowded city, and many, whose business brought them to town, found it cheaper to take up their abode in the quiet hostels of Southwark rather than to stay in the more expensive inns within the walls. The lights came out brightly from many of the casements, with sounds of boisterous songs and laughter. The woman passed these without a pause. Presently she stopped before a cottage, from which a feeble light alone showed that it was tenanted.

"But sadly, Master Ward, very sadly, as I told you when I came across to thank you again in her name and my own for your kindness to her. She was but in poor plight after her journey; poor thing, she was little accustomed to such wet and hardship, and doubtless they took all the more effect because she was low in spirit and weakened with much grieving. That night she was taken with a sort of fever, hot and cold by turns, and at times off her head. Since then she has lain in a high fever and does not know even my wife; her thoughts ever go back to the storming of the castle, and she cries aloud and begs them to spare her lord's life. It is pitiful to hear her. The leech gives but small hope for her life, and in troth, Master Ward, methinks that God would deal most gently with her were he to take her. Her heart is already in her husband's grave, for she was ever of a most loving and faithful nature. Here there would be little comfort for her – she would fret that her boy would never inherit the lands of his father; and although she knows well enough that she would be always welcome here, and that Bertha would serve her as gladly and faithfully as ever she did when she was her nurse, yet she could not but greatly feel the change. She was tenderly brought up, being, as I told you last week, the only daughter of Sir Harold Broome. Her brother, who but a year ago became lord of Broomecastle at the death of his father, was one of the queen's men, and it was he, I believe, who brought Sir Roland Somers to that side. He was slain on the same night as Mortimer, and his lands, like those of Sir Roland, have been seized by the crown. The child upstairs is by right heir to both estates, seeing that his uncle died unmarried. They will doubtless be conferred upon those who have aided the young king in freeing himself from his mother's domination, for which, indeed, although I lament that Lady Alice should have suffered so sorely in the doing of it, I blame him not at all. He is a noble prince and will make us a great king, and the doings of his mother have been a shame to us all. However, I meddle not in politics. If the poor lady dies, as methinks is well-nigh certain, Bertha and I will bring up the boy as our own. I have talked it over with my wife, and so far she and I are not of one mind. I think it will be best to keep him in ignorance of his birth and lineage, since the knowledge cannot benefit him, and will but render him discontented with his lot and make him disinclined to take to my calling, in which he might otherwise earn a living and rise to be a respected citizen. But Bertha hath notions. You have not taken a wife to yourself, Master Geoffrey, or you would know that women oft have fancies which wander widely from hard facts, and she says she would have him brought up as a man-at-arms, so that he may do valiant deeds, and win back some day the title and honor of his family."

Geoffrey Ward laughed. "Trust a woman for being romantic," he said. "However, Master Fletcher, you need not for the present trouble about the child's calling, even should its mother die. At any rate, whether he follows your trade, or whether the blood in his veins leads him to take to martial deeds, the knowledge of arms may well be of use to him, and I promise you that such skill as I have I will teach him when he grows old enough to wield sword and battle-ax. As you know I may, without boasting, say that he could scarce have a better master, seeing that I have for three years carried away the prize for the best sword-player at the sports. Methinks the boy will grow up into a strong and stalwart man, for he is truly a splendid lad. As to archery, he need not go far to learn it, since your apprentice, Will Parker, last year won the prize as the best marksman in the city bounds. Trust me, if his tastes lie that way we will between us turn him out a rare man-at-arms. But I must stand gossiping no longer; the rumors that we are likely ere long to have war with France have rarely bettered my trade. Since the wars in Scotland men's arms have rusted somewhat, and my two men are hard at work mending armor, and fitting swords to hilts, and forging pike-heads. You see I am a citizen, though I dwell outside the bounds, because house rent is cheaper and I get my charcoal without paying the city dues. So I can work somewhat lower than those in the walls, and I have good custom from many in Kent, who know that my arms are of as good temper as those turned out by any craftsman in the city."