Sentiment in the Forex Market. Indicators and Strategies To Profit from Crowd Behavior and Market Extremes 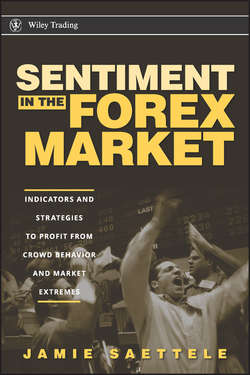 Crowds move markets and at major market turning points, the crowds are almost always wrong. When crowd sentiment is overwhelmingly positive or overwhelmingly negative ? it's a signal that the trend is exhausted and the market is ready to move powerfully in the opposite direction. Sentiment has long been a tool used by equity, futures, and options traders. In Sentiment in the Forex Market, FXCM analyst Jaime Saettele applies sentiment analysis to the currency market, using both traditional and new sentiment indicators, including: Commitment of Traders reports; time cycles; pivot points; oscillators; and Fibonacci time and price ratios. He also explains how to interpret news coverage of the markets to get a sense of when participants have become overly bullish or bearish. Saettele points out that several famous traders such as George Soros and Robert Prechter made huge profits by identifying shifts in crowd sentiment at major market turning points. Many individual traders lose money in the currency market, Saettele asserts, because they are too short-term oriented and trade impulsively. He believes retail traders would be much more successful if they adopted a longer-term, contrarian approach, utilizing sentiment indicators to position themselves at the beginning points of major trends.