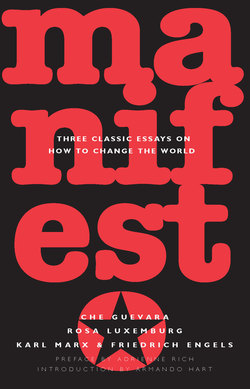 &#147;If you are curious and open to the life around you, if you are troubled as to why, how and by whom political power is held and used, if you sense there must be good intellectual reasons for your unease, if your curiosity and openness drive you toward wishing to act with others, to &#145;do something,&#8217; you already have much in common with the writers of the three essays in this book.&#8221; &#151; Adrienne RichWith a preface by Adrienne Rich, Manifesto presents the radical vision of four famous young rebels: Marx and Engels&#8217; Communist Manifesto, Rosa Luxemburg&#8217;s Reform or Revolution and Che Guevara&#8217;s Socialism and Humanity.

The serious revolutionary, like the serious artist, can’t afford to lead a self-indulgent or self-deceiving life. Patience, realism and critical imagination are required of both kinds of creativity. Yet all the writers in this book speak emotionally of the human condition and of human realization, not as “losing oneself” within a mass collectivity but as release from the frozen senses, the dumbed-down alienation of mass society: Marx of “the complete emancipation of all the human qualities and senses [from the mere sense of having]… The eye has become a human eye when its object has become a human, social object”19; Rosa Luxemburg of “social happiness,” of the mass strike as “creativity,” of “freedom” as no “special privilege” and of the “love of every beautiful day.” And Che of the revolutionary as “moved by great feelings of love” though this may “seem ridiculous” in bourgeois politics; of the need for a “new human being” created through responsible participation in a society belonging to all.

As Aijaz Ahmad has written, “The first resource of hope is memory itself.”20 Marxism is founded on the historical memory of how existing, apparently immutable, human relationships came to be as they are. In the essays that follow we hear voices from three different generations of people who believed, as recent enormous antiwar and anti-imperialist gatherings on every continent have been asserting, that “another world is possible.” If for some today this still only means trying to regulate and refurbish the runaway engine of capitalism, for an ever-growing number of others it means changing the direction of the journey, toward an utterly different, still-forming reality. Here are urgent conversations from the past that are still being carried on, among new voices, throughout the world.