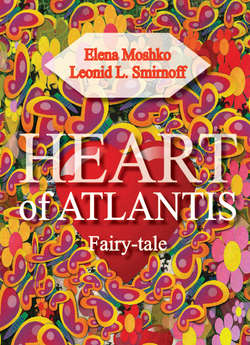 He was eating corn pones while Kayumba was watching him perplexedly. She could hardly control herself. It must have seemed to him from the outside that she, a daughter of Atlantis, did not know what it was to cry, to be lost in doubts! Did he want to be reputed to be a hero? And what about her?

“No, I’m incapable of feats either for the sake of duty or glory”, she touched his hair, “My happiness is here. Here it is, in my palm. I just want to live – quietly, peacefully, calmly. I’m tired of being afraid. And I don’t want to hear anything else about war, death, stone-mortars and barbarian customs. I feel frightened. Protect me!”

He moved awkwardly as if he wanted to dismiss something irrelevant.

“I will not just step into the precipice, I will accomplish a feat in the name of those who have a sixth feeling, whose heart has bled out, whose mouth has dried up from hollow words and false promises. In the name of those who want to win this war! I am foreordained to revive. To revive out of emptiness if I do THAT! There is no light in the escape for me. What’s the point of living in the platitude after that?”