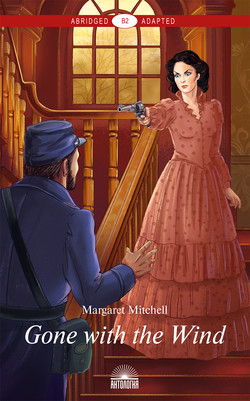 Scarlett O’Hara was not beautiful, but men admired her charm. In her face were the delicate features of her mother of French descent, and the heavy ones of her Irish father. But it was an attractive face, with a pointed chin. Her eyes were pale green with black lashes. Above them, her thick black brows went upward. She had magnolia-white skin – so prized by Southern women of Georgia[1].

On either side of her, the twin brothers sat in their chairs, laughing and talking. Nineteen years old, six feet two inches tall, they were as much alike as two bolls of cotton.

She sat up in bed, hugging her knees, and for a long happy moment she was Mrs. Ashley Wilkes – Ashley’s bride! Then a slight chill entered her heart. Suppose it didn’t work out this way? Suppose Ashley didn’t beg her to run away with him? Resolutely she pushed the thought from her mind.

“I won’t think of that now,” she said firmly. “If I think of it now, it will upset me. There’s no reason why things won’t come out the way I want them – if he loves me. And I know he does!”