How to Know What You What You Don,t Know 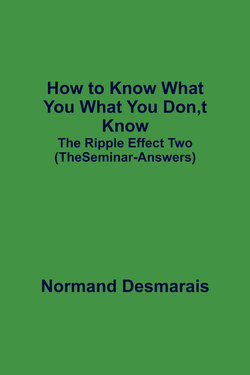 Book one (Stolen Freedoms-'The Stone is Cast' was an introduction to the lies and deceits and secrets that have been hidden from us, which lead to The Ripple Effect-'Countdown to Freedom', which gave more food for thought. This book â€˜How to Know What You What You Don't Knowâ€™ (The Ripple Effect Two-'The Seminar-Answers)' is just that with possible scenarios on how we can change things for the better. There is a better life, all we need to do is realize that and take action to make changes that are needed.

Normand Desmarais. How to Know What You What You Don,t Know

How to Know What You What You Don,t Know. The Ripple Effect Two (TheSeminar-Answers) Normand Desmarais

Forward by the Author

Healing Cancer From the Inside Out

Aspartame is a Multipotential Carcinogen

After Effects of the Prime Law

This book is dedicated to all those that have lost loved ones through disease, war, and suicides. Those that are left behind still suffering physically and mentally because of greed are also remembered.

At this point; it is my pleasure to acknowledge and express my respect for him as an individual, who has demonstrated with this book the value he has to share with the world. What Normand says in this book is all verifiable. I encourage everyone who reads it to do their own due-diligence and to research the references provided.

Ronny smiled back at the man and said. “Like I’ve said before and will say many more times, ’it’s all about, the money.’ Have you ever noticed that a lot of the stuff you saw through advertising is usually not what it was made out to be, not what you really expected, you usually threw it away shortly after wards, or stopped using it, and it is now collecting dust?”

Ronny paused and scanned the crowd, he could see many people turning to others and nodding their heads in agreement with what he had just said. Ronny continued.

Нет рецензий. Будьте первым, кто напишет рецензию на книгу How to Know What You What You Don,t Know