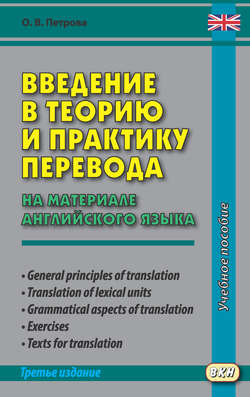 Types of correlation between words in source language and target language

Context and its role in translation

Translation of words having no correspondence in TL

Text 1. Matching the man and the right job. Art Buchwald

Text 2. Talking like your parents? You could do worse. John Rosemond

Text 4. In the bank[6] Stephen Leacock

Translation is a process and the result of turning a text from one language into another, which means expressing the same by the signs of a different language. Bearing in mind that every sign has two planes (plane of expression and plane of content) the essence of translation could be described as changing the elements of the plane of expression while the plane of content remains constant.

The language of the original text is called "source language", the language into which the text is translated is called "target language" (the corresponding Russian terms are "исходный язык" and "переводящий язык").

First of all it is necessary to know that the formula "What will you have?" has a conventional meaning of an invitation to choose some liquor. Besides one should know what "Prohibition" is meant here (the eighteenth amendment to the US Constitution) not to translate it as "запрет". Only in this case there may appear a correct version:

It is also most essential to remember that nations speaking different languages have different experience, and things naturally known to one nation are quite unknown to another. To see it one may try to translate into English the title of the film "Петровка, 38", making it as informative for Englishmen or Americans as it is for us because we know perfectly well what office is situated there.