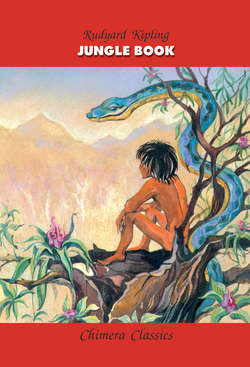 It was seven o’clock of a very warm evening in the Seeonee hills when Father Wolf woke up from his day’s rest, scratched himself, yawned, and spread out his paws one after the other to get rid of the sleepy feeling in their tips. Mother Wolf lay with her big gray nose dropped across her four tumbling, squealing cubs, and the moon shone into the mouth of the cave where they all lived.

«Augrh!» said Father Wolf. «It is time to hunt again».

But though a young wolf would have remembered that advice every hour, Mowgli forgot it because he was only a boy – though he would have called himself a wolf if he had been able to speak in any human tongue.

Shere Khan was always crossing his path in the jungle, for as Akela grew older and feebler the lame tiger had come to be great friends with the younger wolves of the Pack, who followed him for scraps, a thing Akela would never have allowed if he had dared to push his authority to the proper bounds. Then Shere Khan would flatter them and wonder that such fine young hunters were content to be led by a dying wolf and a man’s cub. «They tell me», Shere Khan would say, «that at Council ye dare not look him between the eyes». And the young wolves would growl and bristle.