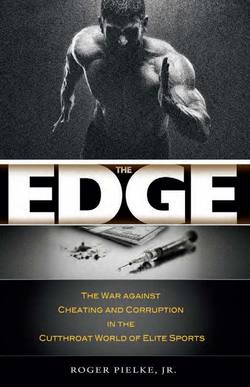 Roger Pielke reveals how sports stars break the rules in their search for a competitive edge.Both entertaining and thought-provoking, THE EDGE not only visits the battlefields in the war against cheating and corruption, but also explores ways to ensure that &#147;the spirit of sport&#8221; can survive in today&#8217;s high-tech, highly professional world.Drawing on controversies straight out of the headlines, Pielke looks at doping, match fixing, fake amateurism, and other ways of breaking the rules. But are those rules–and the values they reflect–hopelessly outdated?Wonderfully readable and scrupulously researched, THE EDGE blends science and journalism to produce an unforgettable account of sport in crisis.

PART I: THE WAR FOR THE SOUL OF SPORT

The other position on Deflategate has been voiced by, among others, Charles Haley, another NFL Hall of Famer and the only player to earn five Super Bowl rings (two with San Francisco and three with Dallas). Haley, who played linebacker and defensive end, positions that often require chasing after quarterbacks (perhaps protected by linemen with silicon on their shirts!), called Brady a cheater: “I’ve lost all respect [for Brady]. When your integrity is challenged in the game of football, to me, all his Super Bowls are tainted.”14 Similar comments were made by Jerry Rice, the Hall of Fame receiver who caught a lot of Joe Montana’s passes, in siding with Haley: “I’m going to be point blank, I feel like it’s cheating.”15