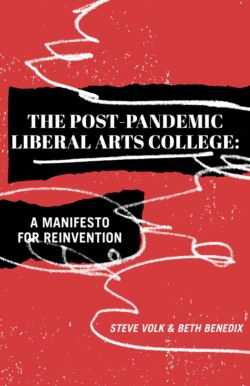 Private liberal arts colleges have been struggling for decades; now, as the COVID-19 pandemic widens cracks latent in many American institutions, they are facing a possibly mortal crisis. In <em>The Post-Pandemic Liberal Arts College: A Manifesto for Reinvention</em>, Steven Volk and Beth Benedix call for small colleges to seize this moment and reinvent themselves. With the rise of rankings that set peer institutions against each other, tuition that outpaces income, creeping pre-professionalism, and a race to build student “customers” the splashiest new amenities, many private liberal arts colleges have strayed from their founders’ missions. If they could shed the mantle of exclusivity, reduce costs, facilitate true social mobility, and collaborate with each other, the authors argue, they might both survive and again become just, equitable, accessible institutions able to offer the transformative and visionary education that is their hallmark.

The Post-Pandemic Liberal Arts College: A Manifesto for Reinvention

The rawness is striking, especially the capacity this student has to parse out his feelings of frustration from his sense of empathy. Even more striking is his assumption that the VPAA would lend a compassionate ear. From the outside, this assumption might look like entitlement, even as this student calls himself out for his privilege. It might look like melodrama, a catalog of relatively small losses to experience in the grand scheme of such a mammoth, global disruption. But what strikes us—from the inside—is the weight this student places on the community that he was forced to leave behind, and his contention that the loss of that community is at the center of his feelings of futility, paralysis, and inertia, feelings he suspects others share. What strikes us is his assurance that his assumption about the VPAA was anything but misplaced, but rather an intuitive guess that this figure who was in charge would respond in a manner consistent with the thoughtful, genuine, self-aware, and compassionate approach that had marked the student’s other interactions on campus.

The VPAA did. He thanked the student and went on to explicitly match the student’s “transparency” (as he describes it) with his own. He candidly expressed the admiration he felt for this student, his care for the student’s anxiety concerning his own experience and that of his peers, his sadness that this unprecedented moment has caused such disruption and pain for the student body, and his agreement with the contention that there were no good solutions to the situation in which DePauw found itself. He exhibited great humility in not having answers, and he provided the student with resources for self-care that he acknowledged “might not be helpful.”