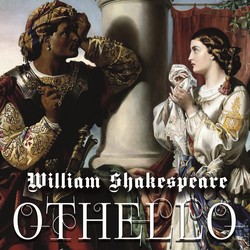 "Othello is a tragedy by William Shakespeare based on the short story «„Moor of Venice“» by Cinthio, believed to have been written in approximately 1603. The work revolves around four central characters: Othello, his wife Desdemona, his lieutenant Cassio, and his trusted advisor Iago. Attesting to its enduring popularity, the play appeared in 7 editions between 1622 and 1705. Because of its varied themes – racism, love, jealousy and betrayal – it remains relevant to the present day and is often performed in professional and community theatres alike. The play has also been the basis for numerous operatic, film and literary adaptations. Othello, suspicious and jealous military general, listened to a malicious gossip from his secret hater Iago and now believes that his beautiful wife Desdemona is unfaithful. Passionate nature of the Moor can’t bear the shame and in a burst of temper he kills the innocent Desdemona… Among the most significant works William Shakespeare: Hamlet, Othello, King Lear, Macbeth, Orpheus, Romeo and Juliet, Julius Caesar, Troilus and Cressida, The Tempest, Venus and Adonis, Antony and Cleopatra, Measure for Measure, The Winter's Tale and many more."