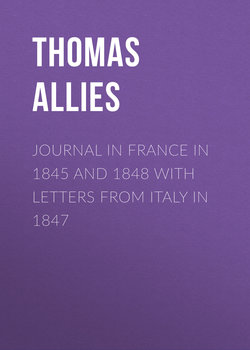 Tuesday, June 24. – Reached Southampton from Oxford in good time, and left by the packet at 10 P.M. We passed the experimental fleet off Portsmouth, had a very fair passage, and were at the mouth of Havre about ten: but for two hours we could not enter; the swell was considerable. At Havre, took our places to Ivetot, which we reached about half-past-nine. The country rich but uninteresting.

Ivetot, June 26. 1845. Thursday. – We called on M. Labbé a little before ten, and were with him till half-past-three. His brother is Supérieur of the Petit Séminaire, in which are 225 youths. The whole payment, on an average, is 360 francs per annum for board and instruction; some paying as little as 200 francs, some as much as 500, but no difference whatever is made between them. The children are evidently on the most affectionate terms with the masters. "There are twelve priests, a deacon and sub-deacon, and three clerks in minor orders." – M.2 They attend confession once a month, and it is very rare that they fail in this: this is the rule of the house; but should any avoid it much longer, his confessor would not speak to him authoritatively at all, or send for him, but rather take an opportunity of referring incidentally to his absence. This hardly ever fails. "They generally thank him for doing so, the reason being something about which they were unable to get themselves to break the ice." – M. They live entirely with their pupils; sleeping, eating, playing, teaching: in the centre of a large dormitory, with beds on both sides, was a bed, nowise distinguished from the rest save that it had a chair beside it; here the Supérieur sleeps. His salary is 1000 francs a year; that of the others about 600. They said, laughing, that it was hardly what a servant in England would receive. The Supérieur has a very pleasing and paternal aspect. We heard him catechise the children in the chapel for some time; their answers were good. Several were on the sacraments, and the reply to them definite and precise: – 'Which is the most indispensable sacrament?' 'Baptism.' 'How many sorts of baptism are there?' 'The baptism of water, of blood, and of desire.' 'Can any sacrament be administered by other than a priest?' 'Yes, baptism in case of necessity.' 'Can any other?' 'None, Sir.' 'What conditions are necessary to receive the sacrament of Penance?' 'Five.' 'Are there any of those more indispensable than others?' 'Yes, fervent sorrow for sin past, and a resolution not to offend God by sinning any more.' 'If a priest conferred absolution on a person who gave no outward sign of penitence, from his state of sickness, would it benefit him?' 'If he was able to make interior actions of the soul, it would; not otherwise.' ('The Church,' said M. Labbé in explanation, 'would prefer bestowing a sacrament often inutilement, to denying it once where it might benefit.') 'Which are the three chief Christian graces?' 'Faith, Hope, and Charity.' 'Which is the most perfect?' 'Charity.' 'Why?' 'Because it presupposes the other two' (I think); and, again, 'because it will last for ever.' 'Will Faith last for ever?' 'Non, Monsieur.' 'Why?' 'Parceque, quand nous verrons Dieu, nous n'aurons pas besoin de le croire.' 'Will you see God?' 'Oui, avec nos propres yeux.' 'You have just received confirmation; what does it make him who receives it?' 'Un parfait Chrétien.' 'Etes-vous donc un parfait Chrétien?' With hesitation, 'Oui, Monsieur.' 'Etes-vous un Chrétien parfait?' 'Non, Monsieur.' 'Quelle est la différence?' 'Un parfait Chrétien est celui qui a tous les moyens pour parvenir au salut – un Chrétien parfait est celui qui est sans péché' 'En y-a-t'il?' 'Non, Monsieur' (with hesitation). 'Non, mon enfant, il n'y en a pas.'

Tuesday, July 8. – We called on M. Théodore Ratisbonne, a man of about forty-two, with striking Jewish physiognomy, gentle and pleasing in manner. I was very much struck with his conversation. We said we came to learn as much as we could of Catholic institutions. 'As for Protestantism,' said he, 'I believe it has produced good fathers of families, good morals, kindly social feelings, and so on; but as for perfect devotion of the heart to God, it seems to me quite barren. But the soul should not walk, she should fly.' On the worship of the Blessed Virgin, so called, he said, 'Place yourself in the presence of Jesus Christ, for He is ever present, He is always the same. You would see beside Him the Blessed Virgin and the Apostles. You would throw yourself at his feet; but having done so, would you have no thought for His mother? Would you turn your back upon her? Would that be a way of gaining His favour? Or, place yourself at the foot of the Cross, remember His last words, and how can any Christian have other than filial feelings towards her? But there is not a child of the poorest Catholic peasant who would for an instant confound the reverence paid to the mother of his Lord with the worship due only to God. C'est une horreur. Elle est une simple créature, une fille d'Adam, notre sœur; mais elle a réçu la grace d'être mère de Dieu. Moi, je baise un tableau de ma mère, de mes sœurs, de mes amis; et je ne baiserais pas celui de la Sainte Vierge? Je fléchis le genou devant les rois de la terre; je ne le fléchirais pas devant elle?' He took up a book by a Protestant minister, I think of Geneva, and read to us with great indignation the account he had made up of a Roman priest's sermon on the Blessed Virgin – the adoring her, and so on. He said the Protestant remarks on that subject were full of bad faith, and were in the highest degree shocking to Catholics. I asked him about his brother's conversion: he said, over and above the printed account which I had seen, 'My brother, two hours after his conversion, was seen by Cardinal Mezzofanti, who was ready to throw himself on his knees in adoration to God. Nothing was known of my brother at Rome, and at first great apprehensions were entertained as to what his character might turn out to be. He had never read two pages of the Bible, never received any religious instruction whatever, was altogether of a light and superficial character. The Blessed Virgin appeared to him as close as I am to you; she made a motion to him that he should remain quiet under the divine influence. On rising out of his ecstacy he had received intuitively the knowledge of the Christian faith. He came and lived three months with me; I never talked with him as to what he should do; I carefully abstained from exercising any influence over him. I had, indeed, great apprehensions of him, as to what his future life would be. At the end of that time I said to him, I am going to offer mass for you, to know what your future vocation will be. He replied, without the slightest hesitation or emotion, I am in no doubt about that. Two courses are open to me: one is to become a priest and live here with you; we should be two brothers together, – that would be, indeed, a delightful life: the other is to enter the Company of Jesus. I do not know what that is, but I shall become a Jesuit. I was very much astonished. As tu bien réflechi, je lui dis? – Je n'y ai pas réflechi, mais la S. Vierge me l'a dit. – Alors je me tus, je ne dis plus une parole. He knew so little what the Jesuits were; he had so great an apprehension what would happen to him, that when he left me he agreed that, if he was unhappy, he would put a certain mark in his letter for me to come and see him. I went after a time to see him: I found him engaged in cleaning the dirtiest parts of the house. They had put him on the severest trials to test his resolution; he surmounted them all, and now, since he has been three years among them, he has never had even l'ombre de peine. I believe that he has more than once received a repetition of the grace he had at Rome, but I have never asked him on the subject. His vocation has been marked out by the Blessed Virgin for the conversion of the Jews. My uncle is worth from six to seven millions of francs: he has disinherited my brother, who has renounced every thing. He built a small church near here: before going into the order of the Jesuits he distributed all his property to the poor, as is their custom; previous to his conversion he had never had vision or anything of the kind.'

M. Ratisbonne, seeing we were greatly interested in all he said, warmed in his manner, and before parting he gave each of us a small book; mine is a Catechism. I told him how much I had liked his life of S. Bernard. 'Ah,' he said, 'you have had the patience to read that.' I begged him to allow me to call on him again before leaving. We then went to Miss Young's, where I wrote down as much as I could remember of our conversation, which had greatly moved me. Thence M. Carron took us to several booksellers; we also called on M. Galais at the Séminaire S. Sulpice, and delivered our letter; as he had a class shortly after, we proposed coming again on Thursday. We then adjourned to the church a short time, to various libraries, and did not get home till late.

Нет рецензий. Будьте первым, кто напишет рецензию на книгу Journal in France in 1845 and 1848 with Letters from Italy in 1847