Journal of a Horticultural Tour through Germany, Belgium, and part of France, in the Autumn of 1835 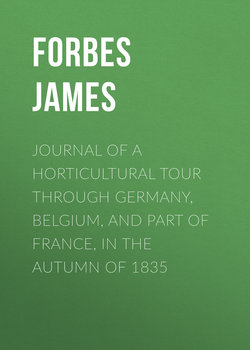 Forbes James. Journal of a Horticultural Tour through Germany, Belgium, and part of France, in the Autumn of 1835

JOURNAL OF A HORTICULTURAL TOUR, IN 1835

The continental gardens and botanical collections having been rarely visited by the British gardener, his Grace the Duke of Bedford, with his usual anxiety for the promotion of useful knowledge, very liberally and kindly proposed in the autumn of 1835 that I should undertake a Horticultural Tour, through several parts of Germany, Belgium, and France, with a view of inspecting the different collections and productions cultivated in some of the most celebrated horticultural establishments in these countries.

The notes which are now submitted to the public contain a cursory detail of the various gardens and objects that came under my observation during a tour occupying a space of eight weeks, – a period of time which the reader will readily understand required the utmost diligence on my part to fulfil the objects I had in view. Yet I was enabled to investigate such modes of culture as were adopted in the principal gardens, where the produce appeared in any way superior to our own; to become thoroughly acquainted with the different systems practised at various seasons of the year would have required an actual residence of many months.

The hothouses in this garden are placed in several separate ranges, and are very substantially built in comparison to our erections in England. The quantity of timber employed in the rafters is immense, but giving them a very heavy appearance; yet I have rarely met with a more healthy collection of plants anywhere; they may be considered the most extensive on the continent of Europe. In short, I never before saw so many plants cultivated in pots. The numerous species of New Holland and Cape genera were quite astonishing, as well as the hardy and Alpine species. As to the Cacteæ, there can be no hesitation in saying that the collection in these gardens of this curious tribe of plants really comprises the most beautifully grown specimens that I have ever seen; the different species that have grown to a considerable size have a very interesting appearance, particularly the Mammillaria and Echinocactus tribes; with their numerous spines and angles, they form a pleasing object either in or out of flower. M. Otto has long been celebrated for his ardent love to this curious tribe of plants, and he certainly has succeeded in forming a valuable collection. The species of Ferns in these gardens are likewise very numerous, and there are many very fine specimens amongst them, which have grown to a great size. I could not but admire the very tasteful manner in which the Cape and New Holland plants were arranged out of doors in the summer months, and which were neatly plunged to the rims of the pots, to prevent them from being blown about by the wind. The Bignonia radicans formed a very prominent object against the end wall of one of the hothouses; the luxuriance and brilliancy of its flowers far surpassed any that I had previously seen. A fine specimen of the Laurus indica, which must have been fully twenty feet in height, was standing out of doors, and obliged to be cut down, as it was getting too high for the house in which it stood in the winter season. The Robinia Pseudacacia, inermis and tortuosa were both splendid trees, which ornamented the grass lawn. The Magnolia acuminata, also a beautiful specimen, as well as the Quercus palustris, and rubra; both had attained a great size, and were handsome trees, as well as several other species of this genus. Mr. Otto having kindly requested Mr. W. Brackenridge, who had been for some time from Scotland, residing in the neighbourhood of Berlin, and was then employed in the Botanic gardens, to accompany me the following day to such places as he considered most deserving of notice, I arranged with him to be ready betwixt six and seven o'clock in the morning, to proceed to the different gardens.

August 27th. We started at seven o'clock in the morning, to the royal gardens at Charlottenburg palace, which are situated about four English miles from Berlin. The grounds attached to this royal palace, are said to contain four hundred English acres, laid out with various walks, clumps of trees and shrubs, as well as several pieces of water, embracing some very fine views from different points notwithstanding its being a flat surface, but it is much diversified by trees, bridges, and sheets of water that intersect the lawn. There are several bridges leading across the stream to the most ornamental and picturesque parts. The palace is also seen to great advantage from several points in the grounds. A very fine specimen of the Quercus palustris was in great beauty on the grass. I also saw some very large trees of the Populus alba, which were considerably larger than any tree of this species that I had previously seen. M. Fintelman, the superintendant of the royal gardens, pointed out to us a very complete Fructiferum, that he had lately formed in these grounds, comprising a collection of all the hardy fruits. Nearly adjoining to the palace, is a very handsome little flower garden, lately executed for the growth of the dwarf flowering perennials and annuals. I was much pleased by an arbour formed with the different species of Cape and New Holland plants, that are rather flexible in their growth; the pots in which the plants grew, were all plunged round the back, the branches tied closely to it and thickly covered, producing a great variety of foliage, and pleasing effect, and having the appearance of growing there permanently throughout the season. Opposite to this Botany Bay, or Cape Arbour, is a pretty summer house, which is chiefly composed of reeds. In the centre of the flower garden, there are various posts with iron rods extended from them for the training of creepers. Again, at the extremity, is an artificial grass bank, considerably elevated above the flower beds, planted with the dwarf china rose, which has a very good and natural effect. The orange-house is an oblong building, of great length, with opaque roof and backwall, upright lights only in the front, completely covered with grape vines, having a very fine crop of fruit all over them. The orange trees were all in excellent health, some of them bearing separately nearly two hundred fruit; there are about three hundred of these trees cultivated here. I also saw a fine variety of Dahlias, and various other beautiful flowering plants in great perfection; these Dahlias are fully as good as any I had seen in England; great attention is paid to these flowers by M. Fintelman, who took great delight in pointing out the various objects most worthy of notice in these grounds. Having devoted several hours to the inspection of this extensive establishment, we then took our leave of M. F. and proceeded back to Berlin, when I had another opportunity of observing more fully the various improvements, that are now going forward in the Thier-garten, or park, which extends from the royal palace of Charlottenburg, to the Brandenburg gate. This park is considered one of the finest in Europe, and is now undergoing extensive alterations, the grounds forming in several places so as to harmonize with the English style of landscape gardening; numerous walk and rides leading in various directions, with groups of sculpture, make this an interesting promenade for the public, by whom it is much thronged, particularly in the evenings. It is approached from Berlin by the Brandenburg gate, which cannot fail to attract the stranger's notice. It has a most magnificent appearance; on the top of this gate stand the celebrated bronze horses, removed by Buonaparte to Paris, but were again replaced by the Prussians in their original site. In front of the Royal Museum, is a very handsome marble vase, which measures about sixty four feet in circumference, and four feet in depth; a handsome fountain is also playing, throwing the water to a great height. The ground floor of the museum is occupied as a sculpture gallery, which contains numerous statues, and busts; but it appeared to me to be deficient of the finer groups. I was however much pleased with the beautiful imitation marble columns of various colours, which have a polish equal to the original. The picture gallery is above that devoted to the sculpture, and I could not but admire the beautiful state of preservation of the paintings, and their very admirable arrangement. From hence we proceeded to the nursery grounds of M. Bouschie, which are not of much extent, nor yet is there much for the Horticulturist to admire, except some very fine specimens of the Cacteæ (Opuntia) tribe; some of the species are from eight to ten feet in height. After visiting this nursery, we then proceeded to the forcing gardens of M. Bouschie, who grows a large quantity of pine apples and peaches for the Berlin market; the pine apples were very small, and much inferior to our English grown fruit; the crop of peaches was very abundant, but not of a large size, the trees old, and the hothouses of a very inferior description. We next proceeded to the nursery garden of M. Touissaint, which appeared to contain a much better collection of the Cape and New Holland plants, than any of the other nurseries I had previously seen in Berlin. Here was a good collection of the more hardy species of Rhododendrons; the forcing of flowers is likewise extensively practised in this establishment, and the grounds in very good order. I next visited the nursery ground of M. Mathieu, where there were some good specimens, but none that I had not previously met with.

Нет рецензий. Будьте первым, кто напишет рецензию на книгу Journal of a Horticultural Tour through Germany, Belgium, and part of France, in the Autumn of 1835