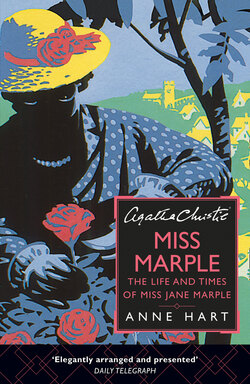 This is the definitive companion to the MISS MARPLE novels, films and TV appearances.‘I have had a lot of experience in solving different little problems that have arisen.’Most of the ‘little problems’ tackled by Miss Marple occurred in the pretty rural village of St Mary Mead and came in the shape of murder, robbery and blackmail. In the 40 years of her career, she even solved cases as far afield as London and the Caribbean. But though she usually masqueraded as ‘everybody’s favourite great aunt’, what was she 'really' like?In this authorised biography of the world’s most famous female sleuth, Anne Hart combs through the 12 novels and 20 short stories in which Miss Marple appeared, uncovering clue and amassing all the evidence to solve the most difficult case of them all – the mystery of Miss Marple.

8 A VISIT TO MISS MARPLE

11 ‘MY NEPHEW, THE AUTHOR’ AND OTHER RELATIVES AND FRIENDS

12 LITTLE MAIDS ALL IN A ROW

FILM AND TV IN OTHER LANGUAGES

If you enjoyed Agatha Christie’s Marple, check out these other great Anne Hart titles

For a very dear aunt,

Over the years Miss Marple reminisced about several different bank managers and their families. There was Mr Hodgson, who ‘went on a cruise and married a woman young enough to be his daughter. No idea of where she came from.’ There was Mr Eade, ‘a very conservative man – but perhaps a little too fond of money.’ Young Thomas Eade, his son, turned out to be a bit of a black sheep and ended up in the West Indies. ‘He came home when his father died and inherited quite a lot of money. So nice for him.’ And there was Mr Emmett, who had married beneath him with the unfortunate result that his wife ‘was in a position of great loneliness since she could not, of course, associate with the wives of the trades people.’

Miss Marple no doubt produced this particular ‘of course’ with her head ‘a little on one side looking like an amiable cockatoo,’ for there it was, the undeniable fact that St Mary Mead was divided into two worlds, with an overall consensus that things went much more comfortably if everyone stuck to the one in which the Good Lord had caused them to be born. Which brings us to that section of the village map marked ‘Shops and Small Houses’ and the people who lived and worked in them.