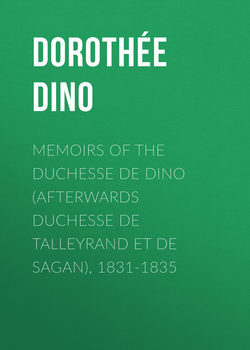 BIOGRAPHICAL INDEX OF THE NAMES OF PERSONS MENTIONED IN THIS BOOK

Paris, May 9, 1831.– I am bewildered by the tumult of Paris. There is such a babel of words, such a crowd of faces, that I hardly recognise myself, and have the greatest difficulty in collecting my thoughts so as to discover where I am, where others are, whether the country is doing well or ill, whether the physicians are skilful enough, or whether the malady is beyond their art.

There was a little article in the Moniteur of yesterday; the attitude of the Ministry and that of the general public are both just and flattering to M. de Talleyrand, but reason is not the fashion nowadays, and less so in this country than elsewhere. In fact, if I were to let my thoughts wander over the thousand and one small complications which spoil and embarrass everything, the only conclusion I could arrive at would be that the country is very ill but that the doctor is excellent!..

Lord Holland told the Duke of Bedford that he should take us to Ampthill, which belongs to him and which lies only seven miles from Woburn. Lady Holland wanted us very much to see a fine portrait of herself as a Virgin of the Sun which is there, and which is, in fact, very pleasing; it must have been very like her.

The house at Ampthill is gloomy, damp, ill-furnished, and ill-kept – a sad contrast with one of the most delightful parks you could see anywhere. It is not, however, without some associations of interest. Katherine of Aragon retired here after her divorce, but there is no trace of the ancient castle which was on the mountains, and not at the bottom of the valley like the present house. A Gothic cross is placed on the site of the ancient building, and on the base are inscribed some bad verses, which have not even the merit of being contemporary, commemorating the cruelties of Henry VIII. Another of the curiosities of the place is a number of trees so old that, in the time of Cromwell, they were already past being used for shipbuilding. They have quite lost their beauty, and will soon be like what in Touraine are called "truisses."