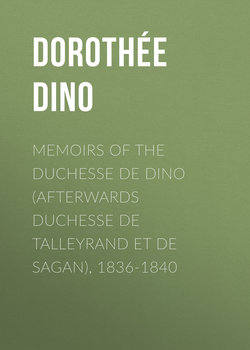 I. Message from President Jackson of the United States

II. Speech by the Duc de Broglie, President of the Council, Chamber of Deputies in the Session of January 6, 1836, on the subject of Poland

III. Eulogy upon Count Reinhart, delivered at the Academy of Moral and Political Science, by the Prince de Talleyrand, in the Session of March 3, 1838

IV. Memorandum addressed by Lord Palmerston to the French Government and handed to M. Thiers by Mr. Bulwer at the beginning of September 1840

V. Manifesto to the Spanish Nation

Paris, April 17, 1837.– The new Ministry, which entered upon office the day before yesterday, and is destined to immortalise the date of April 15, as different Governments are designated by such dates, will have a stern conflict to wage, and I hope, for the sake of its leader, M. Molé, that it will emerge with honour from the struggle. The Journal de Paris offers a frank Doctrinaire opposition; the Journal des Débats pronounces a funeral oration over the last Ministry and offers peace and support to the new one. All this promises neither reality, sincerity, fidelity, nor stability, and I hardly know to whom or to what it is reasonable to trust in the sphere of political relations. M. Royer-Collard came to see me this morning before going to the Chamber of Deputies; he did not seem to think that the new Ministry would survive one session.57

M. Thiers came to dine with us, among other guests, and talked largely, as usual. He came from the Chamber, where they had in vain awaited the official proclamation of the new Ministry which had been announced. The King was to take the Electress,58 who is at Paris at this moment incognito as the Comtesse d'Arco, to visit Versailles, but as the council lasted from ten in the morning till five in the afternoon the King was unable to go out or the Ministers to appear before the Chamber. The incident produced a bad effect upon the Electress, who is said to be irritable and scornful.

In the evening I looked in at the Austrian Embassy, where Madame de Lieven told me a large amount of gossip from London. One of her stories was as follows: At the last Levée the King thanked the Turkish Ambassador aloud and through an interpreter for postponing a dinner which he was giving, on account of the death of Lady Delisle, his natural daughter, and thus showing him a respect which his own family had refused; this remark was aimed at the Duchess of Kent. At the last Drawing-room the Queen could not be present, as she was ill, and it was held by Princess Augusta; the Duchess of Kent arrived with her daughter; the King heartily embraced the latter without noticing her mother, and seeing Sir John Conroy in the throne-room he ordered the Chamberlain to send him out. Finally, when the Prince of Linange came to his mother's house, the Duchess of Kent, with his wife, who is not his equal in birth, the King sent Lord Conyngham to the Duchess to say that he would receive his daughter-in-law, but could not permit her to enter his private apartments; the Duchess declined to receive Lord Conyngham, and sent a message to say that if he came to pay a private call she would see him with pleasure, but that she would not receive him as the King's messenger, and that he need only write down what he had to say. Lord Conyngham then sent her a letter, to which she replied by an epistle of twelve pages, enumerating all her supposed grievances against the King, and concluding with the statement that if her daughter-in-law were not received as a princess she would never set foot in the King's house again. She had several copies made of the letter, and sent them to all the members of the Cabinet. Lord Conyngham, who told all this to Madame de Lieven, in spite of his Whig principles, went on to say that the position of the English Ministry was unpleasant, as their relations with the King were disturbed and they were unpopular in the country, and that the difficulties concerning the Bank and the progress of affairs in Spain were very unpleasant incidents for the Cabinet.

It is settled that the Duc de Coigny is to be knight-of-honour to the Duchesse d'Orléans. He is naturally impolite, his habits are uncivilised, and he has only one hand, so that he will not be able to offer his hand to the Princess. An equally certain appointment is that of the Comtesse Anatole de Montesquiou as first lady to accompany the Princess, and to take the place of the lady-of-honour, whose delicate health will often prevent her from performing her duties.64 This is an excellent choice. Madame de Montesquiou is forty-six years of age, her reputation is unblemished, she has been pretty and is still pleasant to look upon, her manners are quiet and simple and are the exact expression of her life and character. No better choice and no person better suited for the position could be found.