An Isle of Surrey: A Novel 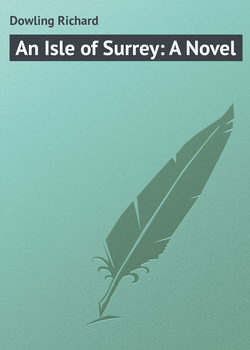 Dowling Richard. An Isle of Surrey: A Novel

CHAPTER XI "CAN I PLAY WITH THAT LITTLE BOY?"

CHAPTER XIV. THE FIRE AT RICHMOND

CHAPTER XIX. THE TOW-PATH BY NIGHT

CHAPTER XXIIV. REWARD FOR A LIFE

CHAPTER XXVI. A BRIDGE OF SIGHS

CHAPTER XXIX. AN INTRUDER UPON THE AIT

CHAPTER XXXI. BY THE BOY'S BEDSIDE

CHAPTER XXXIII "I MUST GO TO FETCH HER HOME."

Crawford Street, into which the stranger and his uncouth conductor had turned, was a narrow, dingy, neglected blind lane. The end of it was formed of a brick wall, moss-grown and ragged. On the right hand side were gates and doors of idle wharves, whose rears abutted on the bay; on the left, a long low unbroken wall separating the roadway from a desolate waste, where rubbish might be shot, according to a dilapidated and half-illegible notice-board; but on the plot were only two small mounds of that dreary material, crowned with a few battered rusty iron and tin utensils of undeterminable use.

"Why," cried her brother in amused surprise, "where on earth did you get this information?"

"From Mrs. Grainger, whom you sent to help me to-day. Mrs. Grainger knows the history of the whole neighbourhood from the time of Adam."