Free and Impartial Thoughts, on the Sovereignty of God, The Doctrines of Election, Reprobation, and Original Sin: Humbly Addressed To all who Believe and Profess those Doctrines. 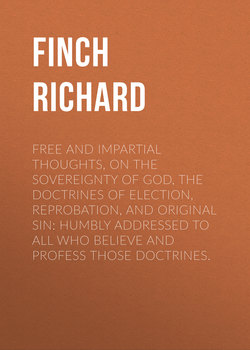 Finch Richard. Free and Impartial Thoughts, on the Sovereignty of God, The Doctrines of Election, Reprobation, and Original Sin: Humbly Addressed To all who Believe and Profess those Doctrines.

CHRISTIANITY having been instituted, by its great Author and Publisher, for the Benefit and Advantage of Mankind, it is pity we should so greatly differ, concerning what Genuine Christianity is; if the Holy Bible, as we generally agree, was designed to lead us to the true Knowledge of God, and to be a standing and perpetual Rule of Faith and Manners to Men, it must surely have been greatly corrupted since the primitive Times of the Gospel, or the Explication of it designedly left to a more excellent and superior Director: For the seeming Contradictions, and Multiplicity of obscure Passages, wherewith it abounds, shew plainly it could never, in its present Condition, be a Rule of Faith, &c. becoming an all-wise and perfect Being, to give to rational Creatures. Every good Man, Society, and State, study Perspicuity in all their Rules, Orders, and Statutes, dispensed to their Families, Members, and Subjects: and can we suppose, that He, who is perfect in Knowledge, would, in the Dispensation of his Laws, take less care of the everlasting State of his immortal Creature Man? Yet it is plain, we differ in our Sentiments of Religion, and greatly too, for want, as I sincerely hope, of the Knowledge of better Helps, to direct our Inquiries, in Matters, the true Knowledge whereof, is of so considerable Moment. Therefore,

I intend, in the Course of this Debate, to descant freely, on the Doctrines of Divine Sovereignty, Election, Reprobation, and Original Sin; and also, on the Arguments which some ingenious Gentlemen have used to support them. But I hope (with regard to the Authors I may possibly name) to be perfectly decent, and to treat them with all becoming Respect and Deference, as I think Men of Integrity, Learning and Abilities deserve; who, though in some Points they may err, and hold Doctrines in their own Nature and Tendency altogether subversive of Religion and Morality, do nevertheless not perceive them to have these Tendencies, and are therefore by no Means chargeable with them. Yet, as touching the Doctrines themselves, I shall presume to speak freely, both in regard to their Nature, and what appears to me to be their genuine Fruits and Effects.

As God is an infinite Mind or Spirit, perfectly acquainted, at every Instant of Time, with whatever hath been, is, or shall be; and all Things possible to be; ’tis evident, that all possible Relations of Persons and Things are fully known to him; and that all moral and divine Obligations, arising from the Relation we stand in to God, and to each other, did, in their own Nature, previous to actual Law or Commandment, exist; because the one was in Time, and the other Eternal; one commenced only (at best) with the Being and Beginning of Creatures, the other was from all Eternity, co-existent with the Divine Wisdom itself; and such an inseparable Concomitant therewith, that, in regard to the Divine Being, himself, it was absolutely impossible, but that, on his creating such a Rank of Beings as we are, moral and religious Obligations must have been invariably and unalterably the same; and if, as these Men teach, God’s having commanded the Practice of Virtue, be its peculiar Sanction, and that alone which distinguishes it from Vice or Evil; then, by the same or as good an Argument, his commanding Light in the Beginning, is all the Reason we have for esteeming Light and Darkness different, (as they really are) the one being the actual Pretence of a real Body, and the other a mere Name, to signify its Absence; not that Vice is therefore a mere Name, to signify the Absence of Virtue, for Comparisons seldom hold good in every minute Particular; but there is a Parity between the two Cases, sufficient to justify my bringing in the one, as an Illustration of the other. There is no Knowledge more certain, than what Mankind commonly have of Good and Evil; and he who, in order to serve any private Scheme of Religion, goes about to depreciate this Knowledge, robs Mankind of all Truth and Certainty whatever, and in the End subjects his own darling Schemes to the same Uncertainty; for if we cannot judge of the Fitness, of plain moral Truth and Duty, neither can we of any Scheme of Religion; especially such as hang together more by Art and human Contrivance, than by Reason or Revelation.

Being very desirous to get all the Information I could, concerning the Matter in Debate; I have attentively read over Mr. Cole’s Treatise on the Sovereignty of God. I know ’tis thought an unanswerable Performance; and, so far as it regards general Christianity, it is worth every Christian’s serious Notice: But as to the Doctrine it was wrote to support, it leaves it (in my Judgment) no better than it found it; but is miserably weak, and defective, as to any Thing that looks like sound Reason, or true Argument; and amounts to no more than this poor Assertion, That because God is a Sovereign, he may do what he pleases: And, from the Instances he brings from Scripture, ’tis plain, that Mr. Cole himself pays as little Regard to the intrinsick Worth and Excellence of Things, as is done by many of his Brethren. The manner in which he has been pleased to give us the Story of Jacob and Esau, proves the Truth of this Observation, I have no great Inclination to spend Time in explaining hard Passages of Scripture, (tho’ if any thing of that kind can be serviceable, or deem’d excellent, ’tis Mr. Taylor of Norwich his Book on Original Sin,) or to trespass on the Reader’s Patience, by throwing one Text of hard and uncertain Meaning against another; for by this means the Controversy hath been needlessly prolonged. Where the Scriptures are plain, positive and reasonable, their Authority ought to be conscientiously adhered to: But as this is not always the Case, the next Thing to knowing what is the true Meaning of any particular Text of Scripture is, to know what it neither does nor can possibly mean; in which Case, the Divine Attributes, and the Nature and Reason, or (if you please) Fitness of Things, is the best Rule. We cannot, it is impossible we should, understand the certain determinate Meaning of any Text of Scripture better, if altogether so well, as we do know certainly, that God is just and good, and know also as clearly, what Justice and Goodness mean, when applied to the Deity, as we do, when we apply them to ourselves. And this Rule, if duly observed, would be abundantly sufficient, to set aside many Interpretations of Scripture, too commonly admitted upon this and the like Occasions. And, besides this never failing Argument (to all who attend duly to its Force) it is worth while, just to remark, that though, as the Bible now stands, there are in it (as we must acknowledge) some Passages, which (especially at first sight) seem to favour the Doctrine of Sovereignty, &c. yet as it is possible, nay sometimes easy, to give them another interpretation, and the general Scope and Tenor of the Scripture being agreeable to such an Interpretation, we have abundantly more Reason to reject, than to admit of the Sense, in which these Gentlemen are pleased to understand and expound many Texts of the Bible, relating to this and other affinitive Points.

Нет рецензий. Будьте первым, кто напишет рецензию на книгу Free and Impartial Thoughts, on the Sovereignty of God, The Doctrines of Election, Reprobation, and Original Sin: Humbly Addressed To all who Believe and Profess those Doctrines.