The Doctrines of Predestination, Reprobation, and Election 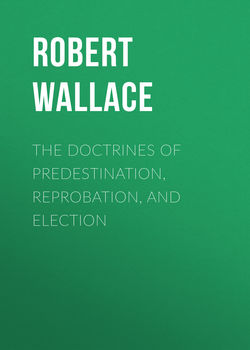 Robert Wallace. The Doctrines of Predestination, Reprobation, and Election

CHAPTER I. THE WORD PREDESTINATION, AND THE DOCTRINE AS HELD BY CALVINISTS

CHAPTER III. THE DOCTRINE OF PREDESTINATION CONSIDERED WITH REFERENCE TO ALMIGHTY POWER

CHAPTER I. THE CALVINISTIC DOCTRINE OF REPROBATION STATED

CHAPTER II. THE BIBLE USAGE OF THE WORD REPROBATION

CHAPTER V. SUMMARY OF THE BIBLE DOCTRINE OF REPROBATION

CHAPTER I. THEORIES OF CALVINISTIC ELECTION

CHAPTER III. CALVINISTIC ELECTION CONSIDERED IN REFERENCE TO THE SOVEREIGNTY OF GOD

CHAPTER VI. OBJECTIONS TO THE CALVINISTIC DOCTRINE OF ELECTION

Regarding the predestinarian controversy, it has been said, “Hardly one among the many Christian controversies has called forth a greater amount of subtlety and power, and not one so long and so persistently maintained its vitality. Within the twenty-five years which followed its first appearance upwards of thirty councils (one of them the General Council of Ephesus) were held for the purpose of this discussion. It lay at the bottom of all the intellectual activity of the conflicts in the Mediæval philosophic schools; and there is hardly a single subject which has come into discussion under so many different forms in modern controversy” (Ch. Encyc.)

Although the controversy between Pelagius and Augustine began in the fifth century, it is an interesting inquiry—What was the mind of the earlier Christian writers on the subject? Of course their opinion cannot settle the truth of the question in debate, but it has a very important bearing upon the subject. The late Dr. Eadie claimed the voice of antiquity for the system of the Confession of Faith. He says, “The doctrine of predestination was held in its leading element by the ancient Church, by the Roman Clement, Ignatius, Hermas, Justin Martyr, and Irenæus, before Augustine worked it into a system, and Jerome armed himself on its behalf” (Ec. Cyc.) This statement may be fairly questioned, and, we think, successfully challenged. Dr. Cunningham, in his Historical Theology, remarks, “The doctrine of Arminius can be traced back as far as the time of Alexandrinus, and seems to have been held by many of the Fathers of the third and fourth centuries.” He attributes this to the corrupting influence of Pagan philosophy (Hist. Theo., Vol. II., p. 374). This is not a direct contradiction to Eadie, but it shows that truth compelled this sturdy Calvinist to admit that non-Calvinistic views were held in the earlier and best period of the Church. The question, however, is one that must be decided by historical evidence, and not by authority. And what is that evidence? Mosheim, in writing of the founders of the English Church, says, “They wished to render their church as similar as possible to that which flourished in the early centuries, and that Church, as no one can deny, was an entire stranger to the Dordracene doctrines” Reid’s Mos., p. 821). The Synod of Dort met in a.d. 1618, and condemned the Arminian doctrine, and decided in favour of Calvinism; but, according to Mosheim, this system of Calvin was unknown to the early Church. Faber maintains the same. He says, “The scheme of interpretation now familiarly, though perhaps (if a scheme ought to be designated by the name of its original contriver) not quite correctly, styled Calvinism, may be readily traced back in the Latin and Western Church to the time of Augustine. But here we find ourselves completely at fault. Augustine, at the beginning of the fifth century, is the first ecclesiastical writer who annexes to the Scriptural terms ‘elect’ and ‘predestinate’ the peculiar sense which is now usually styled Calvinistic. With him, in a form scarcely less round and perfect than that long and subsequently proposed by the celebrated Genevan reformer himself, commenced an entirely new system of interpretation previously unknown to the Church Catholic. What I state is a mere dry historical fact” (Faber’s Apos. Trin., Cooke’s Theo., p. 305).

Whilst the monks of Adrumetum drew natural conclusions from the dogmas of Augustine, there came determined opposition to the new creed. It came from the south of France. John Cassian, who had been a deacon under Chrysostom, had established a cloister at Massila (Marseilles), and had become its abbot, entered the lists against the Bishop of Hippo. He departed from the opinions of Pelagius regarding the corruption of human nature, and he recognised “grace” as well as justification in the sense of Augustine. But he widely differed from him, as will be seen from the summary of Semi-pelagianism given by Buck. It is as follows: “(1.) That God did not dispense His grace to one man more than another in consequence of an absolute and eternal decree, but was willing to save all men if they complied with the terms of the Gospel. (2.) That Christ died for all mankind. (3.) That the grace purchased by Christ, and necessary to salvation, was offered to all men. (4.) That man before he received this grace was capable of faith and holy desires. (5.) That man was born free, and consequently capable of resisting the influence of grace, or of complying with its suggestions.” Buck remarks, “The Semi-pelagians were very numerous, and the doctrine of Cassian, though variously explained, was received in the greatest part of the monastic schools in Gaul, from whence it spread itself far and wide through the European provinces. As to the Greeks and other Eastern Churches, they had embraced the Semi-pelagian doctrine before Cassian.” Yet when, as in 1843, similar opinions were proclaimed in Scotland, they were everywhere met with the cry of “New Views,” although they had been held so extensively 1400 years before! So much for ignorance.

The name “Semi-pelagians” was not assumed by the party, lest they should be held as maintaining the dogmas of Pelagius; neither was it given until long after the early heat of the controversy. Their opponents still stigmatised them as Pelagians, although they had departed from the system advocated by the British monk.