The Divorce of Catherine of Aragon 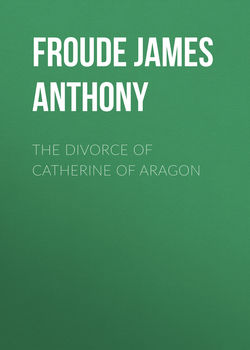 Froude James Anthony. The Divorce of Catherine of Aragon

Thus as early as 1526 certainly, and probably as much as a year before, Cardinal Wolsey had been feeling his way at Rome for a separation between Henry and Catherine. On September 7 in that year the Bishop of Bath, who was English Ambassador at Paris, informed the Cardinal of the arrival there of a confidential agent of Pope Clement VII. The agent had spoken to the Bishop on this especial subject, and had informed him that there would be difficulties about it.1 The “blessed divorce” —benedictum divorcium the Bishop calls it – had been already under consideration at Rome. The difficulties were not specified, but the political features of the time obliged Clement to be circumspect, and it was these that were probably referred to. Francis I. had been defeated and taken prisoner by the Imperialists at Pavia. He had been carried to Spain, and had been released at Henry’s intercession, under severe conditions, to which he had reluctantly consented, and his sons had been left at Madrid as hostages for the due fulfilment of them. The victorious army, half Spanish, half German, remained under the Duke of Bourbon to complete the conquest of Italy; and Charles V., with his already vast dominions and a treasury which the world believed to be inexhaustibly supplied from the gold mines of the New World, seemed advancing to universal empire.

France in the preceding centuries had been the hereditary enemy of England; Spain and Burgundy her hereditary friends. The marriage of Catherine of Aragon had been a special feature of the established alliance. She was given first to Prince Arthur, and then to Henry, as a link in the confederacy which was to hold in check French ambition. Times were changing. Charles V. had been elected emperor, largely through English influence; but Charles was threatening to be a more serious danger to Europe than France had been. The Italian princes were too weak to resist the conqueror of Pavia. Italy once conquered, the Papacy would become a dependency of the empire, and, with Charles’s German subjects in open revolt against it, the Church would lose its authority, and the organisation of the Catholic world would fall into hopeless decrepitude. So thought Wolsey, the most sharp-sighted of English ministers. He believed that the maintenance of the Papacy was the best defence of order and liberty. The only remedy which he could see was a change of partners. England held the balance between the great rival powers. If the English alliance could be transferred from the Empire to France, the Emperor could be held in check, and his supposed ambition neutralised. Wolsey was utterly mistaken; but the mistake was not an unnatural one. Charles, busy with his Italian wars, had treated the Lutheran schism with suspicious forbearance. Notwithstanding his Indian ingots his finances were disordered. Bourbon’s lansquenets had been left to pay themselves by plunder. They had sacked monasteries, pillaged cathedral plate, and ravished nuns with irreverent ferocity. The estates of the Church had been as little spared by them as Lombardy; and to Clement VII. the invasion was another inroad of barbarians, and Bourbon a second Attila. What Bourbon’s master meant by it, and what he might intend to do, was as uncertain to Clement as perhaps it was to Charles himself. In the prostrate, degraded, and desperate condition into which the Church was falling, any resolution was possible. To the clearest eyes in Europe the Papacy seemed tottering to its fall, and Charles’s hand, if he chose to raise it, might precipitate the catastrophe. To ask a pope at such a time to give mortal offence to the Spanish nation by agreeing to the divorce of Catherine of Aragon was to ask him to sign his death-warrant. No wonder, therefore, that he found difficulties. Yet it was to France and England that Clement had to look for help in his extremities. The divorce perhaps had as yet been no more than a suggestion, a part of a policy which was still in its infancy. It could wait at any rate for a more convenient season. Meantime he sent his secretary, Sanga, to Paris to beg aid; and to Henry personally he made a passionate appeal, imploring him not to desert the Apostolic See in its hour of extreme need. He apologised for his importunacy, but he said he hoped that history would not have to record that Italy had been devastated in the time of Clement VII. to the dishonour of the King and of Wolsey. If France and England failed him, he would himself be ruined. The Emperor would be universal monarch. They would open their eyes at last, but they would open them too late. So piteous was the entreaty that Henry when he read the Pope’s letter burst into tears.2 Clement had not been idle. He had brought his own small army into the field to oppose Bourbon; he joined the Italian League, and prepared to defend himself. He was called the father of Christendom, yet he was at open war with the most Catholic king. But Wolsey reasonably considered that unless the Western powers interfered the end would come.

That the Pope would be willing, if he dared, to gratify Henry at Charles’s expense was only too likely. The German Lutherans and the German Emperor were at the moment his most dangerous enemies. France and England were the only Powers who seemed willing to assist him, and a week before the meeting of Wolsey’s court he had experienced in the most terrible form what the imperial hostility might bring upon him. On the 7th of that same month of May the army of the Duke of Bourbon had taken Rome by storm. The city was given up to pillage. Reverend cardinals were dragged through the streets on mules’ backs, dishonoured and mutilated. Convents of nuns were abandoned to the licentious soldiery. The horrors of the capture may have been exaggerated, but it is quite certain that to holy things or holy persons no respect was paid, and that the atrocities which in those days were usually perpetrated in stormed towns were on this occasion eminently conspicuous. The unfortunate Pope, shut up in the Castle of St. Angelo, looked down from its battlements upon scenes so dreadful that it must have appeared as if the Papacy and the Church itself had been overtaken by the final judgment. We regard the Spaniards as a nation of bigots, we consider it impossible that the countrymen of Charles and Philip could have been animated by any such bitterness against the centre of Catholic Christendom. Charles himself is not likely to have intended the humiliation of the Holy See. But Clement had reason for his misgivings, and Wolsey’s policy was not without excuse. Lope de Soria was Charles’s Minister at Genoa, and Lope de Soria’s opinions, freely uttered, may have been shared by many a Catholic besides himself. On the 25th of May, a fortnight after the storm, he wrote to his master the following noticeable letter: —

“The sack of Rome must be regarded as a visitation from God, who permits his servant the Emperor to teach his Vicar on earth and other Christian princes that their wicked purposes shall be defeated, the unjust wars which they have raised shall cease, peace be restored to Christendom, the faith be exalted, and heresy extirpated… Should the Emperor think that the Church of God is not what it ought to be, and that the Pope’s temporal power emboldens him to promote war among Christian princes, I cannot but remind your Majesty that it will not be a sin, but a meritorious action, to reform the Church; so that the Pope’s authority be confined exclusively to his own spiritual affairs, and temporal affairs to be left to Cæsar, since by right what is God’s belongs to God, and what is Cæsar’s to Cæsar. I have been twenty-eight years in Italy, and I have observed that the Popes have been the sole cause of all the wars and miseries during that time. Your Imperial Majesty, as Supreme Lord on earth, is bound to apply a remedy to that evil.”10