Under the Liberty Tree: A Story of The 'Boston Massacre' 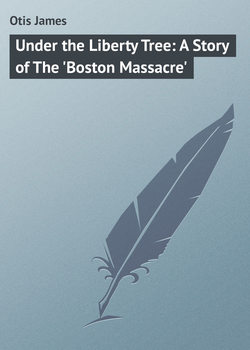 Otis James. Under the Liberty Tree: A Story of The 'Boston Massacre'

CHAPTER I. THE LIBERTY TREE

CHAPTER V. A NIGHT OF TERROR

CHAPTER VI. AFTER THE MASSACRE

It was on the evening of February 21, 1770, in the city of Boston, that a party of boys, ranging in age from ten to eighteen years, were assembled at what was known as "Liberty Hall," which was not a building, but simply the open space sheltered by the wide-spreading branches of the "Liberty Tree."

Although General Gage's troops occupied the city, and patrols of the "bloody backs," as the red-coated soldiers had been called in derision, paced to and fro at regular intervals along the streets, these boys spoke openly of their desire, and even of their intention, to avenge the wrongs under which the colonists were suffering, believing from past experience that the troops would not dare proceed to extremities with the citizens, more especially since Lieutenant-Governor Hutchinson "doubted his authority to order the soldiers to fire upon the populace."1

He found in the wood-house a piece of planed board, three feet long and fifteen or sixteen inches in width, on which he inscribed, after much labour, with paint composed of lampblack and fish-oil, the name of each of the merchants who had been guilty of breaking their agreement regarding the sale of British goods.

This he nailed on the spar within a few feet of the head, affixing it so firmly that it could not readily be wrenched off, and the instrument of warning was held erect a few moments that the young conspirators might observe the general effect.