Ireland under the Tudors, with a Succinct Account of the Earlier History. Vol. 1 (of 3) 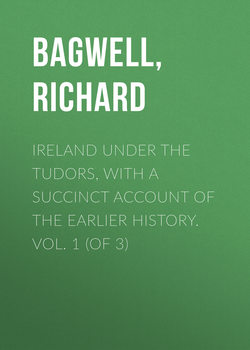 Bagwell Richard. Ireland under the Tudors, with a Succinct Account of the Earlier History. Vol. 1 (of 3)

CHAPTER V. FROM THE INVASION OF THE BRUCES TO THE YEAR 1346

CHAPTER VI. FROM THE YEAR 1346 TO THE ACCESSION OF HENRY VII

CHAPTER IX. FROM THE ACCESSION OF HENRY VIII. TO THE YEAR 1534

CHAPTER XIV. 1541 TO THE CLOSE OF THE REIGN OF HENRY VIII

CHAPTER XVI. FROM THE ACCESSION OF EDWARD VI. TO THE YEAR 1551

CHAPTER XVII. FROM THE YEAR 1551 TO THE DEATH OF EDWARD VI

CHAPTER XVIII. THE REIGN OF MARY

The main object of this book is to describe in some detail, and as impartially as possible, the dealings of England with Ireland during the reigns of Henry VIII. and his three children. As an introduction to the study of that period, it seemed desirable to give some account of the course of government during those 340 years which had elapsed since the first Anglo-Norman set foot upon the Irish shore. And, seeing that Teutonic invaders had effected a lodgment about three centuries and a half before Henry II.’s accession, it was hardly possible to avoid saying something about the men who built the towns which enabled his subjects to keep a firm grip upon the island. Lastly, it seemed well at the very outset to touch lightly upon the peculiarities of that Celtic system with which the King of England found himself suddenly confronted.

Agricola took military possession of south-western Scotland partly in the hope of being able to invade Ireland. He had heard that the climate and people did not differ much from those of Britain, and he knew that the harbours were much frequented by merchants. He believed that annexation would tend to consolidate the Roman power in Britain, Gaul, and Spain, and kept by him for some time a petty Irish king who had been expelled by his own tribe, and to whom he professed friendship on the chance of turning him to account. Agricola thought there would be no great difficulty in conquering the island, which he rightly conjectured to be smaller than Britain and larger than Sicily or Sardinia.

‘These portions being thus allotted and assigned were possessed and enjoyed accordingly until the next partition, which, at the discretion or will of the Canfinny, might be made at the death of each inferior tenant. And thus by these frequent partitions and the removals or translations of the tenants of one portion or another, all the possessions were uncertain, and the uncertainty of possession was the very cause that no civil habitations were erected, and no enclosure or improvement of lands made, in the Irish countries where that custom of gavelkind was in use; especially in Ulster, which seemed everywhere a wilderness before this new plantation made there by the English undertakers. And this was the fruit of this Irish gavelkind.’

Notwithstanding the above decision, it is probable that a description of tanistry and gavelkind does not exhaust the subject. The theoretical division among all the males of a sept is not at all likely to have been carried out, except in very early times. Human nature was against it. From the twelfth century the example of the Anglo-Normans, which cannot have been altogether without weight, was against it. The interest of the chief was everywhere against it, because it would deprive him of the means of rewarding his friends, and because he was always tempted to seize lands to his own use. The tendency to private property would be always asserting itself, but the exact historical truth can never be known. Before the close of the mediæval period, a great part of Ireland had been reconquered by the tribes from Anglo-Norman hands. Is it possible that the Irish land system can have been anywhere restored in its integrity? On the whole, it is at least probable that English statesmen in the sixteenth century made as many mistakes about tenures in Ireland as their representatives in the eighteenth and part of the nineteenth made about tenures in India. Good faith may be generally granted in both cases, but the blunders made were no less disastrous. It is at all events clear that primogeniture was no Celtic usage, that it is no part of the law of nature, and that the Tudor lawyers treated it as an end in itself, and almost as a necessary element in the eternal fitness of things. In the twelfth century Irish practice may have come much nearer to theory than in the sixteenth; at all events, Henry II.’s grants to individuals were absolutely opposed to Celtic notions of justice.

Нет рецензий. Будьте первым, кто напишет рецензию на книгу Ireland under the Tudors, with a Succinct Account of the Earlier History. Vol. 1 (of 3)