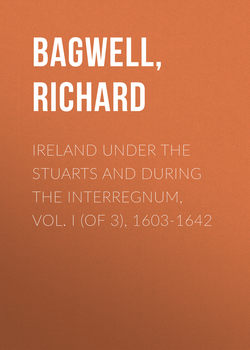 CHAPTER V. THE SETTLEMENT OF ULSTER

CHAPTER XII. THE PARLIAMENT OF 1634

CHAPTER XV. CASES OF MOUNTNORRIS, LOFTUS, AND OTHERS

CHAPTER XIX. THE REBELLION OF 1641

CHAPTER XX. PROGRESS OF THE REBELLION

Ireland in 1625, to illustrate colonization projects

Neither his relations with his own mother nor with Queen Elizabeth had given any reason to suppose that the new king was attached to the religion of Rome. Tyrone had offered his services to James years before, and was told that he would be reminded of this when it should please God ‘to call our sister the Queen of England to death.’ After his raid in Munster Tyrone wrote in rather a triumphant strain, but still obsequiously, to the King of Scots. This did not prevent James from offering his help to Elizabeth when the Spaniards took Kinsale, for which she thanked him. A rumour that his Majesty was a Catholic was nevertheless widely circulated in Ireland, and caused a strange ferment in the corporate towns. Much stress was also laid upon his descent from ancient Irish kings. During the Queen’s later years mass had been freely celebrated in private houses, and a strong effort was now generally made to celebrate it publicly in the churches. Jesuits, seminaries, and friars, says the chronicler Farmer, ‘now came abroad in open show, bringing forth old rotten stocks and stones of images, &c.’ The agitation was strong in Kilkenny, Thomastown, Waterford, Limerick, Cork, and in the smaller Munster towns; and even Drogheda, ‘which since the conquest was never spotted with the least jot of disloyalty,’ did not altogether escape the contagion. In the latter town a chapel had long been connived at, but the municipal officers firmly repressed the agitation and even committed a man who had ventured to express a hope of open toleration. Mountjoy declared himself satisfied, but a note in his hand shows that he was still suspicious. Probably he thought it wiser not to have north and south upon his hands at the same time.2

The money issued in 1601 contained only 25 per cent. of silver, but it was easily counterfeited with a much greater alloy, and interested people gave out that it contained no silver at all. Soon after his accession James consented to revert to the old practice of Ireland, and to establish a currency containing 75 per cent. of silver; but this was ordered by proclamation to be received as sterling. The name sterling had hitherto been applied to the much purer coinage of England, and a new element of confusion was thus introduced. The base coin of 1601 was cried down at the same time, so that a shilling should be received for fourpence of the new money. When Davies arrived he found that people would not take the dross even at the reduced rate, and they were even more unwilling to do so when another proclamation cried down the new and comparatively pure shillings also from twelvepence to ninepence. The King had granted 20,000 pardons in a few months, but Davies was of opinion that he would gain more popularity by giving twopence for every bad shilling and then recalling the whole issue than by all his clemency. The Solicitor-General could speak feelingly, his fees on all the pardons being paid in copper, while the royal revenue was in the same way reduced almost to nothing. Soldiers and officials were the greatest losers, for they had to take what the proclamations allowed, while traders could not be forced to do so. A few were sent to prison for refusing, but this only caused discontent without securing obedience, and there was a riot at Galway. The matter was brought to a crisis by a case decided in the summer of 1604.14

The bad money was proclaimed current in May 1601, and in April, while the pure coin of England was still current in Ireland, one Brett of Drogheda, merchant, having bought wares from one Gilbert, in London, became bound to Gilbert for 200l. on condition to pay the said Gilbert, his executors or assigns 100l. sterling current and lawful money of England at the tomb of Earl Strongbow in Christchurch, Dublin, on a certain future day, which day happened after the said proclamation of mixed monies. On that day Brett tendered 100l. in mixed money of the new standard. The question was whether this tender was good. Sir George Carey, being Deputy and Vice-Treasurer, ordered the case to be stated for the judges who were of the Privy Council, and they decided after an immense display of learning that Brett had rightly tendered in the only lawful money of Ireland, that Gilbert was worthy of punishment for refusing to receive it, and that the Irish judges could take cognisance of no money except what was established by proclamation. The several courts of record in Dublin accepted this as law, and all the cases pending were so decided. In other words, Ireland repudiated the greater part of her debts. The situation created was intolerable, for credit was destroyed; but it was not till the beginning of 1605 that the English Government made up its mind that the various kinds of coin in Ireland might be lawfully current for their true value. In 1607 English money was made legal tender in Ireland at the rate of sixteen pence Irish to the shilling. All who knew the country best wished to have one coinage for England and Ireland, but official hindrances were constantly interposed, and the difficulty was not got over until after the unification of the two Exchequers in 1820. Some establishment charges are still paid with deductions for the difference between old Irish and sterling money.15

Нет рецензий. Будьте первым, кто напишет рецензию на книгу Ireland under the Stuarts and during the Interregnum, Vol. I (of 3), 1603-1642