The Variation of Animals and Plants under Domestication — Volume 1 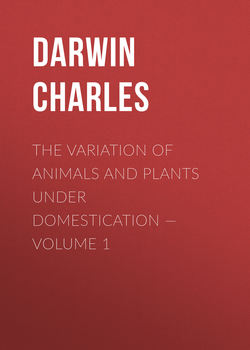 Darwin Charles. The Variation of Animals and Plants under Domestication — Volume 1

ANCIENT VARIETIES OF THE DOG. RESEMBLANCE OF DOMESTIC DOGS IN VARIOUS COUNTRIES TO NATIVE CANINE SPECIES. ANIMALS NOT ACQUAINTED WITH MAN AT FIRST FEARLESS. DOGS RESEMBLING WOLVES AND JACKALS. HABIT OF BARKING ACQUIRED AND LOST. FERAL DOGS. TAN-COLOURED EYE-SPOTS. PERIOD OF GESTATION. OFFENSIVE ODOUR. FERTILITY OF THE RACES WHEN CROSSED. DIFFERENCES IN THE SEVERAL RACES IN PART DUE TO DESCENT FROM DISTINCT SPECIES. DIFFERENCES IN THE SKULL AND TEETH. DIFFERENCES IN THE BODY, IN CONSTITUTION. FEW IMPORTANT DIFFERENCES HAVE BEEN FIXED BY SELECTION. DIRECT ACTION OF CLIMATE. WATER-DOGS WITH PALMATED FEET. HISTORY OF THE CHANGES WHICH CERTAIN ENGLISH RACES OF THE DOG HAVE GRADUALLY UNDERGONE THROUGH SELECTION. EXTINCTION OF THE LESS IMPROVED SUB-BREEDS.

Whether domestic cats have descended from several distinct species, or have only been modified by occasional crosses, their fertility, as far as is known, is unimpaired. The large Angora or Persian cat is the most distinct in structure and habits of all the domestic breeds; and is believed by Pallas, but on no distinct evidence, to be descended from the F. manul of middle Asia; and I am assured by Mr. Blyth that the Angora cat breeds freely with Indian cats, which, as we have already seen, have apparently been much crossed with F. chaus. In England half-bred Angora cats are perfectly fertile with one another.

Within the same country we do not meet with distinct races of the cat, as we do of dogs and of most other domestic animals; though the cats of the same country present a considerable amount of fluctuating variability. The explanation obviously is that, from their nocturnal and rambling habits, indiscriminate crossing cannot without much trouble be prevented. Selection cannot be brought into play to produce distinct breeds, or to keep those distinct which have been imported from foreign lands. On the other hand, in islands and in countries completely separated from each other, we meet with breeds more or less distinct; and these cases are worth giving, showing that the scarcity of distinct races in the same country is not caused by a deficiency of variability in the animal. The tailless cats of the Isle of Man are said to differ from common cats not only in the want of a tail, but in the greater length of their hind legs, in the size of their heads, and in habits. The Creole cat of Antigua, as I am informed by Mr. Nicholson, is smaller, and has a more elongated head, than the British cat. In Ceylon, as Mr. Thwaites writes to me, every one at first notices the different appearance of the native cat from the English animal; it is of small size, with closely lying hairs; its head is small, with a receding forehead; but the ears are large and sharp; altogether it has what is there called a "low-caste" appearance. Rengger (1/93. 'Saugethiere von Paraguay' 1830 s. 212.) says that the domestic cat, which has been bred for 300 years in Paraguay, presents a striking difference from the European cat; it is smaller by a fourth, has a more lanky body, its hair is short, shining, scanty and lies close, especially on the tail: he adds that the change has been less at Ascension, the capital of Paraguay, owing to the continual crossing with newly imported cats; and this fact well illustrates the importance of separation. The conditions of life in Paraguay appear not to be highly favourable to the cat, for, though they have run half-wild, they do not become thoroughly feral, like so many other European animals. In another part of South America, according to Roulin (1/94. 'Mem. presentes par divers Savans: Acad. Roy. des Sciences' tome 6 page 346. Gomara first noticed this fact in 1554.), the introduced cat has lost the habit of uttering its hideous nocturnal howl. The Rev. W.D. Fox purchased a cat in Portsmouth, which he was told came from the coast of Guinea; its skin was black and wrinkled, fur bluish-grey and short, its ears rather bare, legs long, and whole aspect peculiar. This "negro" cat was fertile with common cats. On the opposite coast of Africa, at Mombas, Captain Owen, R.N. (1/95. 'Narrative of Voyages' volume 2 page 180.) states that all the cats are covered with short stiff hair instead of fur: he gives a curious account of a cat from Algoa Bay, which had been kept for some time on board and could be identified with certainty; this animal was left for only eight weeks at Mombas, but during that short period it "underwent a complete metamorphosis, having parted with its sandy-coloured fur." A cat from the Cape of Good Hope has been described by Desmarest as remarkable from a red stripe extending along the whole length of its back. Throughout an immense area, namely, the Malayan archipelago, Siam, Pegu, and Burmah, all the cats have truncated tails about half the proper length (1/96. J. Crawfurd 'Descript. Dict. of the Indian Islands' page 255. The Madagascar cat is said to have a twisted tail; see Desmarest in 'Encyclop. Nat. Mamm.' 1820 page 233, for some of the other breeds.), often with a sort of knot at the end. In the Caroline archipelago the cats have very long legs, and are of a reddish-yellow colour. (1/97. Admiral Lutke's Voyage volume 3 page 308.) In China a breed has drooping ears. At Tobolsk, according to Gmelin, there is a red-coloured breed. In Asia, also, we find the well-known Angora or Persian breed.