That Little Girl of Miss Eliza's: A Story for Young People 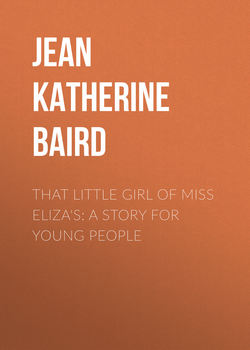 Eliza never could tell how long it was before she opened her eyes again. She was conscious at first of the sun beating down upon her face. Bewildered she opened her eyes only to close them again quickly against the unbearable light of the sky at midday. She tried to move, but her muscles were bound. A delicious sense of languor was again stealing over her, when she moved her hand slightly and felt water running over it. This aroused her again, and set her thoughts in motion. Little by little it all came back to her; her drive, the woman and child and the run-away horse. She knew now where she was. She need not open her eyes to see. She was lying at the foot of the stone wall at Paddy’s Run hill. She could hear the noise of running water. She thought of these things in a dreamy, far-off fashion as though it were something she might have read sometime. The child! Then she realized the awfulness of what had happened. Had she killed them both! She did not dare think of anything so horrible. She lay quite still, straining every nerve to listen for some sound of life. She heard it at last. It was the most beautiful sound she had ever heard in all her life. A low gurgly coo and then the touch of baby fingers on her face.

“Pitty ady – det up. Pitty ady, don’t seep so long.” The laughing dimpled face of the child looked down at her. It had escaped then. It was with a delicious feeling of thankfulness that she closed her eyes, not to open them again for several hours.

“Well, just as you please,” said he, but he drew a chair beside her and watched her closely. He alone realized that she was on the point of collapse which might come suddenly upon her. He thought only of her physical condition. He had not estimated the power of will which is able to put aside all physical discomfort and carry a thing through because it is right to do so.

So Eliza sat bolt upright in the stiff chair, hideous with its red plush upholstery, and related all that had happened the several hours before.