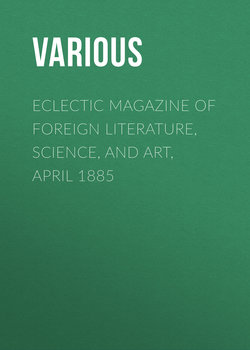 A WORD MORE ABOUT AMERICA. BY MATTHEW ARNOLD

REVIEW OF THE YEAR. BY FREDERIC HARRISON

THE POETRY OF TENNYSON. BY RODEN NOEL

THE AMERICAN AUDIENCE. BY HENRY IRVING

STIMULANTS AND NARCOTICS. BY PERCY GREG

A ROMANCE OF A GREEK STATUE. BY J. THEODORE BENT

THE LIFE OF GEORGE ELIOT25. BY JOHN MORLEY

IN THE NORWEGIAN MOUNTAINS. BY OSCAR FREDRIK, KING OF SWEDEN AND NORWAY

THE HEALTH AND LONGEVITY OF THE JEWS. BY P. KIRKPATRICK PICARD, M.D., M.R.C.S

THE HITTITES26. BY ISAAC TAYLOR

AUTOMATIC WRITING, OR THE RATIONALE OF PLANCHETTE. BY FREDERICK W. H. MYERS

NOTES ON POPULAR ENGLISH. BY THE LATE ISAAC TODHUNTER

The opening of a new year again assembles us together to look back on the work of the year that is gone, to look faithfully into our present state, and to take forecast of all that yet awaits us in the visible life on earth, under the inspiring sense of the Great Power which makes us what we are, and who will be as great when we are not.

In the light of this duty to Humanity as a whole, how feeble is our work, how poor the result! And yet, looking back on the year that is just departed, we need not be down-hearted. Surely and firmly we advance. Not as the spiritualist movements advance, by leaps and bounds, as the tares spring up, as the stubble blazes forth, but by conviction, with system, with slow consolidation of belief resting on proof and tested by experience. If at the beginning of last year we could point to the formation of a new centre in North London, this year we can point to its maintenance with steady vigor, and to the opening of a more important new centre in the city of Manchester. Year by year sees the addition to our cause of a group in the great towns of the kingdom. Liverpool, Manchester, Birmingham, Newcastle, already have their weekly meetings and their organised societies.

In our Sunday meetings, which have been regularly continued excepting during the four summer months, we have continued our plan of dealing alike with the religious, the social, and the intellectual sides of the Positivist view of life and duty. The Housing of the Poor, Art, Biology, Socialism, our social Duties, the Memory of the Dead, the Positivist grounds of Morality, and our Practical Duties in Life, formed the subject of one series. Since our re-opening in the autumn, we have had courses on the Bible, on the religious value of the modern poets, and on the true basis of social equality. Amongst the features of special interest in these series of discourses is that one course was given by a former Unitarian minister who, after a life of successful preaching in the least dogmatic of all the Christian Churches, has been slowly reduced to the conviction that the reality of Humanity is a more substantial basis for religion to rest on than the hypothesis of God, and that the great scheme of human morality is a nobler Gospel to preach than the artificial ideal of a subjective Christ. I would in particular note the series of admirable lectures on the Bible, by Dr. Bridges, which combined the results of the latest learning on this intricate mass of ancient writings with the sympathetic and yet impartial judgment with which Positivists adopt into their sacred literature the most famous and most familiar of all the religious books of mankind. And again I would note that beautiful series of discourses by Mr. Vernon Lushington on the great religious poets of the modern world: – Dante, Shakespeare, Milton, Byron, Wordsworth and Shelley. When we have them side by side, we shall have before us a new measure of the sound, sympathetic, and universal spirit of Positivist belief. It is only those who are strangers to it and to us who can wonder how we come to put the Bible and the poets in equal places of honor as alike the great organs of true religious feeling.

The systematic teaching of science, which is an essential part of our conception of Positivism, has been maintained in this hall with unabated energy. In the beginning of the year Mr. Vernon Lushington commenced and carried through (with what an effort of personal self-devotion no one of us can duly measure) his class on the history and the elements of Astronomy. This winter, Mr. Lock has opened a similar class on the History and Elements of Mathematics. Positivism is essentially a scheme for reforming education, and it is only through a reformed education, universal to all classes alike, and concerned with the heart as much as the intellect, that the religious meaning of Humanity can ever be unfolded. The singing class, the expense of which was again assumed by Mr. Lushington, was steadily and successfully maintained during the first part of the year. We are still looking forward to the formation of a choir. The social meetings which we instituted last year have become a regular feature of our movement, and greatly contribute to our closer union and our better understanding of the social and sympathetic meaning of the faith we profess.