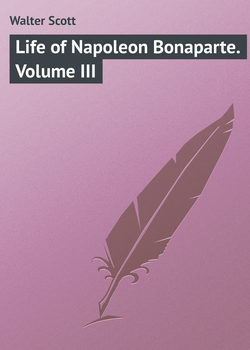 When the treaty of Amiens appeared to have restored peace to Europe, one of Buonaparte's first enterprises was to attempt the recovery of the French possessions in the large, rich, and valuable colony of St. Domingo, the disasters of which island form a terrible episode in the history of the war.

The convulsions of the French Revolution had reached St. Domingo, and, catching like fire to combustibles, had bred a violent feud between the white people in the island, and the mulattoes, the latter of whom demanded to be admitted into the privileges and immunities of the former; the newly established rights of men, as they alleged, having no reference to the distinction of colour. While the whites and the people of colour were thus engaged in a civil war, the negro slaves, the most oppressed and most numerous class of the population, rose against both parties, and rendered the whole island one scene of bloodshed and conflagration. The few planters who remained invited the support of the British arms, which easily effected a temporary conquest. But the European soldiery perished so fast through the influence of the climate, that, in 1798, the English were glad to abandon an island which had proved the grave of so many of her best and bravest, who had fallen without a wound, and void of renown.

Meanwhile, Buonaparte was deeply engaged in intrigues of a different character, by means of which he hoped to place the sovereign authority which he had acquired, on a footing less anomalous, and more corresponding with that of the other monarchs in Europe, than it was at present. For this purpose an overture was made by the Prussian minister Haugwitz, through the medium of M. de Meyer, President of the Regency of Warsaw, proposing to the Comte de Provence (since Louis XVIII.,) that he should resign his rights to the crown of France to the successful general who occupied the throne, in which case the exiled princes were to be invested with dominions in Italy, and restored to a brilliant existence. The answer of Louis was marked at once by moderation, sense, and that firmness of character which corresponded with his illustrious birth and high pretensions. "I do not confound Monsieur Buonaparte," said the exiled monarch, "with those who have preceded him; I esteem his bravery and military talents; I owe him good-will for many acts of his government, for the good which is done to my people I will always esteem done to me. But he is mistaken if he thinks that my rights can be made the subjects of bargain and composition. The very step he is now adopting would go to establish them, could they be otherwise called in question. I know not what may be the designs of God for myself and my family, but I am not ignorant of the duties imposed on me by the rank in which it was his pleasure I should be born. As a Christian, I will fulfil those duties to my last breath. As a descendant of Saint Louis, I will know by his example how to respect myself, even were I in fetters. As the successor of Francis the First, I will at least have it to say with him, 'We have lost all excepting our honour!'"

Such is the account which has been uniformly given by the Princes of the House of Bourbon, concerning this communication, which is said to have taken place on the 26th February, 1803.35 Buonaparte has, indeed, denied that he was accessory to any such transaction, and has said truly enough, that an endeavour to acquire an interest in the Bourbon's title by compromise, would have been an admission on his part that his own, flowing, as he alleged, from the people, was imperfect, and needed repairs. Therefore, he denied having taken any step which could, in its consequences, have inferred such an admission.